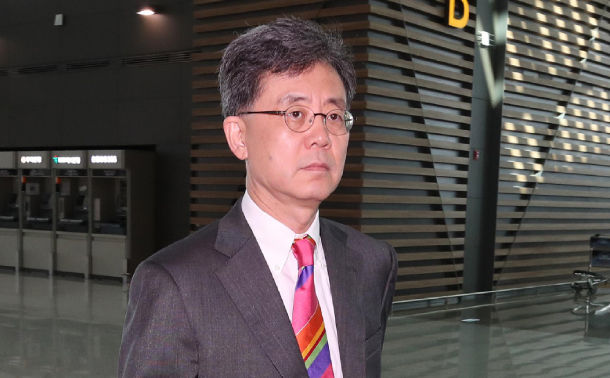 Korea’s point man on trade left for Canada on Tuesday on a three-nation tour to seek joint responses against the United States’ move to levy tariffs on imported autos.

Trade Minister Kim Hyun-chong is set to meet with Canada’s minister of foreign affairs, Chrystia Freeland, on Tuesday to discuss joint strategies against the U.S. probe into foreign autos on national security grounds under Section 232.

The auto industries of Canada and Mexico - the top two exporters of vehicles to the U.S. - have been a focus of attention as the Donald Trump administration is set to roll out new tariffs amid drawn-out North American Free Trade Agreement negotiations. Korea is the fifth-largest auto exporter to the U.S. by sales as of 2017, according to the trade ministry.

Kim plans to fly to the U.S. on Wednesday for meetings with U.S. government officials, lawmakers and industry officials along with a Korean delegation that also includes the president of Hyundai Motor.

The outreach meetings come as Korea is pushing to defend its auto industry and mulling ways to effectively deal with Washington’s investigation into foreign autos.

Seoul has claimed that it has already reflected U.S. demands in the auto sector in the recently revised bilateral trade deal and that Korean automakers contribute to the U.S. economy by manufacturing cars and employing workers.

While Korean-made autos are exempt from U.S. duties under the bilateral trade pact implemented in 2012, market watchers say new tariffs of 25 percent could deal a heavy blow to local manufacturers and parts makers.

The minister also plans to visit Mexico on July 23 to attend the Pacific Alliance (PA) summit and discuss the latest U.S. import restrictions with Mexican officials.

Korea has been negotiating with PA members - Chile, Colombia, Mexico and Peru - to join the Latin American trading bloc as an associate member, which could be similar in effect to a trade pact with Mexico.

Korea has signed free trade deals with Chile, Peru and Colombia but has yet to do the same with Mexico, the largest economy in the alliance.

From Mexico, Kim plans to fly back to the U.S. for outreach meetings before returning home.

Billed to the brim