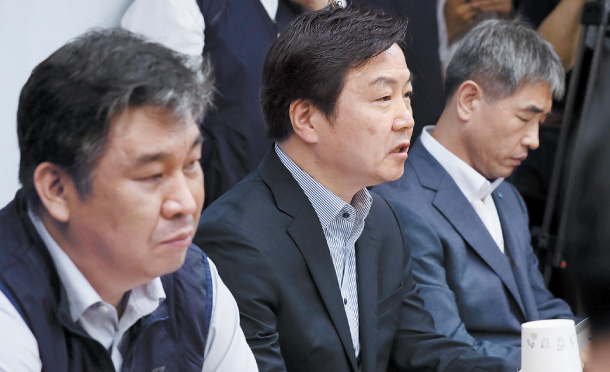 Hong Jong-hak, minister for SMEs and startups, center, speaks during a meeting held Tuesday with the Korea Federation of Micro Enterprise. Hong promised that he would work to come up with supportive plans for small enterprises in the face of the minimum wage hike. [YONHAP]

The Korea Federation of Micro Enterprise (KFME) on Tuesday demanded that the government set a different minimum wage for businesses with less than five employees. The federation also called for the resignation of the government representatives on the Minimum Wage Commission, the body that determines the minimum wage.

The commission - composed of nine representatives each of the government, labor and management - decided over the weekend to hike the minimum wage by an additional 10.9 percent next year. This will increase the hourly threshold from the current 7,530 won ($6.70) to 8,350 won.

“A differentiated minimum wage standard should be applied for microbusiness under five employees - one that properly considers their solvency,” said Choi Seung-jae, the federation’s head, at an emergency meeting held Tuesday at KFME’s headquarters in Dongjak District, southern Seoul. “[The government] needs to come up with a concrete and practical roadmap,” he added.

Choi said that microenterprises were being marginalized from the discussion, which he says was led by the government, major businesses and their labor unions.

“Microbusiness owners are under the direct influence of the minimum wage but they don’t take part in the Minimum Wage Commission in person - they don’t have the right to express opposition,” he said.

The KFME, when calling for the resignation of government representatives on the Minimum Wage Commission, accused them of making a one-way decision.

Nine business representatives on the committee boycotted the weekend meeting after its request to set a different minimum wage for different industries was turned down. Two of them represented the KFME.

For a collective protest in the interest of microbusinesses, the KFME said it will combine forces with merchants in traditional markets, farmers and fishermen. Details or exact schedules for the collective action will be decided after a general meeting on July 24.

Hong Jong-hak, minister for SMEs and startups, met with KFME officials on the same day to hear their opinions. He also suggested they conduct a campaign to encourage the purchase of goods from small enterprises.

“[I am aware] there are many difficulties regarding the minimum wage hike, but I’ll make sure to deliver the problems raised today to come up with supportive measures,” he said ahead of the meeting.