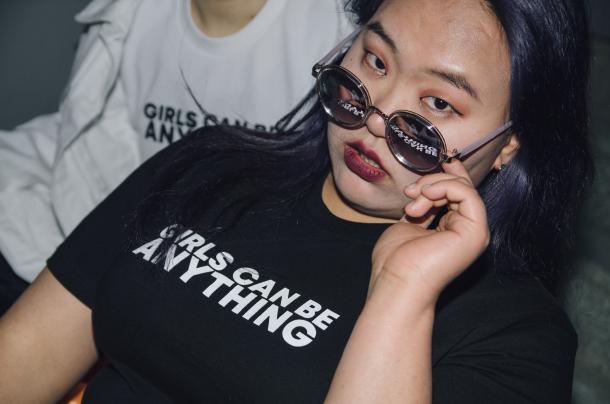 A model for the feminist art collective Utopia poses in a photograph. [PARK I-HYEON]

There is something evocative and empowering about the photograph of a schoolgirl jumping in a nondescript parking lot. We don’t see her face, only the plaid skirt and black shirt that make up her uniform, but there she is nonetheless, suspended in midair, floating playfully in the sunlight as if the entire world were her own.

The creator of this image, Kwak Ye-in, calls it feminist photography. She is one of eight members of Utopia, an artistic collective created in the aftermath of the Gangnam Station murder, when a self-proclaimed misogynist stabbed a 23-year-old woman to death in a public bathroom in 2016. The case prompted a social reckoning with issues of gender equality, women’s rights and sexual assault.

Encouraged by the nationwide conversation, four university students, including Kwak, with a fervent love of photography started talking about forming a collective and established Utopia last year.

“There isn’t anything drastically different about a feminist photographer,” said Kim Jae-in, one of the founders. “What we do is capture specific aspects of a model that they want to express rather than locking them up in poses or styles commonly associated with different genders.”

The artists focus on multitudes of beauty beyond conventional expressions of gender. So instead of asking female models to perform the typical pose in most commercial shoots - a round expression with an innocent listlessness in the eyes - the photographers of Utopia place their subjects in situations that allow the women to be freer, active and independent.

“When we take photos, we constantly remind ourselves not to get stuck in gender stereotypes,” Kim said. “Feminism is about opening opportunities to women instead of forcing them to act or behave in certain ways. I especially abhor sexually objectifying women to fulfill desire. We refrain from reproducing such photos.”

The same applies to male models. “Men can love pink or flowers,” she said. “It’s not a matter of gender but a matter of the individual.” 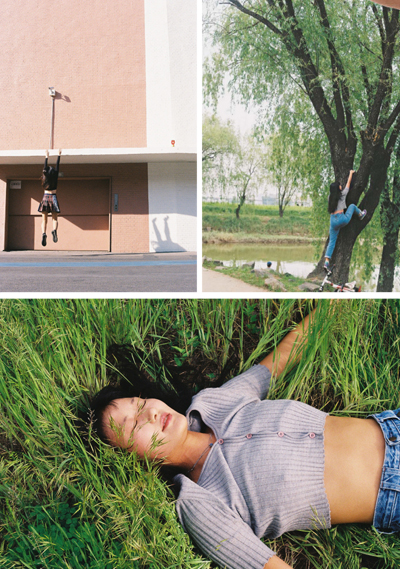 The members of Utopia call themselves “feminist photographers” and aspire to defy conventional notions of gender in their work. Kwak Ye-in, one of the founders, depicts women as free-spirited and independent drivers of their own narrative. [KWAK YE-IN]

Even before the Gangnam Station murder, the young photographers of Utopia felt a burning desire to upend the industry currently dominated by men. Women, they found, often had trouble finding work because of the stigma against female photographers in a still largely patriarchal society.

“In extreme cases, the company directly mentions in a job posting that it’s only looking for male photographers,” said Kim Jae-in. “What makes the problem more severe is that such discrimination against women is nothing compared to what happens in video and advertising.”

“There is a common misconception that women on set are unprofessional and whiny,” said Kim Hyo-won, another member of Utopia.

Many recruiters also perceive women as weaker, she added.

“It’s true that men are physically stronger than women,” Kim Hyo-won said, “but this doesn’t mean they should get picked over those women who have more talent and experience. It’s not right to categorize people as men and women when hiring them. It’s a matter of the individual. In fact, the cinematographer behind ‘Black Panther’ was a woman.”

The prevalence of discrimination in the industry has pushed some women to strike it out on their own.

“I’m working as a freelancer instead of working at a photo studio,” said Kim Bun-hong, another member of Utopia. “People are forced to adhere to a strict hierarchy once they start working in a studio. For women, that means they have to put up with senior photographers’ outspoken judgments about their looks and their dirty jokes, both of which are very common in a studio.”

The photographers who want to stay, Kim Bun-hong said, keep their anger hidden out of fear of consequences.

“Despite the unfair treatment, these women can’t really openly complain about the bullies because this industry is very small,” she said. “Word spreads very fast, and once it does, it becomes more challenging for a female photographer to land a job.”

Every time Kim Hyo-won comes home from her studies at the Art Institute of Chicago, she finds Korea’s regression shocking.

“It has been five years since I went to the United States,” she said, “and in the States, people from my school were comparatively more open-minded, so I often feel surprised when I come to Korea and see how people react to gender issues, which are far different from what I got used to in the States.”

She was especially taken aback by the work of Lolita-obsessed photographer Rotta, who is known for posing young celebrities and models in sexually suggestive scenarios. In one particularly controversial photo, singer-actor Sulli and Hara of the now-disbanded girl group Kara are wrapped in a single extra-large baby pink T-shirt that barely covers their buttocks. They are staring at the camera with puppy eyes and flushed cheeks and biting the shirt’s neckline.

“My friends and professor were in complete shock when I showed them several of Rotta’s photos during class,” Kim said. “The general response was disgust. My professor, a man, was at a loss for words and kept asking, ‘Is he a professional artist? He publishes these photos with his name on it?’”

In March, police summoned Rotta for questioning after three models accused him of sexually harassing them during shoots.

Even though progress in Korea is frustratingly slow, Kim Jae-in is determined to break gender stereotypes through her work.

“I’m very interested in portrait photography,” she said. “I hope to break women free from gender stereotypes even if the biases may be very small.”

To do that, Kim creates visual contradictions - a short-haired woman, often perceived in Korea as aggressive, wearing heavy makeup and performing a delicate task, or the other way around.

Coming out of the feminism closet

There are plenty of photographers who are cognizant of the visual representation of gender, but the difficult part is admitting to the public that one is a gender-conscious photographer. Despite the controversy they cause, Lolita-derived work like Rotta’s - and there is plenty of it - continues to be distributed, and people continue to gladly consume it.

“It is not easy for photographers to openly say that they are feminist, especially those who are just starting their career,” Kim Jae-in said. “Even Irene, who is successful and popular, was severely criticized by the public when they sensed she was a feminist.”

Kim was referring to Irene, a member of the girl group Red Velvet. The singer caused a stir in March when she shared a book she recently finished during a fan meeting. The book was “Kim Ji Young Born 1982,” a novel about the subtle microaggressions and indignities that Korean women face daily. Male fans of the Red Velvet were incensed that Irene read a feminist book and posted images online of them burning photos of her.

Such open hostility prevents many women from voicing support for gender equality, and this makes the members of Utopia even more determined.

“It is important to change the perceptions of those in positions of power because frankly, nobody listens to the minority,” said Kim Hyo-won. “I know this sounds cruel and it isn’t easy. That’s why we need more successful women. Society needs more female role models that young women can look up to. More successful women means bigger hopes and more employment opportunities for women, which in turn will lead to higher chances of success for up-and-coming women.”

“I want my views and lenses to have power, through which I hope to provide a gender-neutral perspective of the world.”