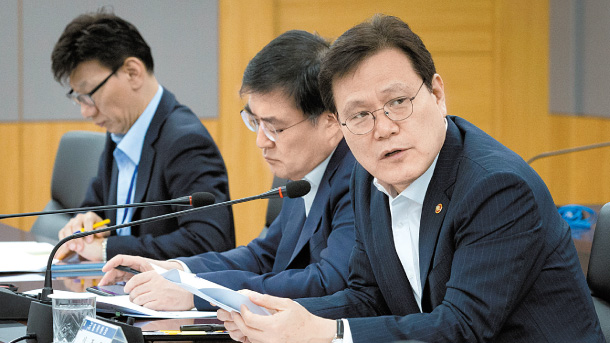 Financial Services Commission (FSC) Chairman Choi Jong-ku met with loan officers from commercial banks last week to ask them to step up their risk management in the face of rising economic uncertainties.

According to the FSC on Tuesday, Choi met with loan officers in charge of corporate and household lending on Friday to discuss the debt situation.

“Major countries have recently started to roll back their loose monetary policies, while volatility in the global economy, including the trade conflict [between the United States and China,] has expanded,” said Choi. “There are growing concerns over possible corporate and household debt insolvency.”

Although the rate at which debt is increasing has slowed, overall debt, including credit card debt, is at an all-time high. As of March, Korea’s debt amounted to 1,468 trillion won ($1.3 trillion), after growing by 17.2 trillion won in the first three months of the year.

Korea debt-to-GDP ratio was the third highest in the world in 2017, according to the Bank of Korea.

The percentage of household debt payments that were overdue went up from 0.23 percent at the end of last year to 0.25 percent at the end of March, according to the Financial Supervisory Service. The insolvency rate of loans to small and medium-sized businesses went up from 1.11 percent to 1.13 percent during the same period. The corporate loan insolvency is largely due to the struggling shipping and automotive industries. In May, GM Korea shut down its plant in Gunsan, North Jeolla, leaving part suppliers and the regional economy crippled.

Small businesses, such as restaurants and convenience stores, have been complaining that the increased minimum wage has taken a toll on their businesses.

A survey by the Bank of Korea (BOK) released on July 5 indicated that the banking industry’s loan and credit card debt risk has risen to the highest level since the 2003 credit card insolvency crisis.

The credit risk index for this quarter rose to 33, which is six points higher than the 27 for second quarter. This is the highest that the index has risen since the third quarter of 2003, when it rose to 44.

The credit risk index is based on a survey of loan officers at 199 financial institutions, including 15 commercial banks, 16 mutual savings banks, eight credit card companies, 10 life insurance companies and 150 mutual financial cooperatives. The higher the figure is, the more worried the loan officers are about insolvency risk.

“The burden of paying off loans increased as interest rates have been rising, and as new apartments have hit the market, some apartments may lose their value, which will raise household credit risk further,” the BOK report noted.

Credit risk for corporate loans has also increased due to the trade conflict between the United States and China.

A recent report from Standard & Poor’s (S&P) noted that a sudden hike in the interest rate would weigh heavily on local banks due to their massive loans.

Although the Korean central bank kept its benchmark rate at 1.5 percent for the eighth consecutive month, the U.S. Federal Reserve signaled two more additional hikes within this year, so the BOK will likely face pressure to raise its interest rates.