SHIN KYUNG-JIN
The author is the Beijing correspondent for the JoongAng Ilbo. 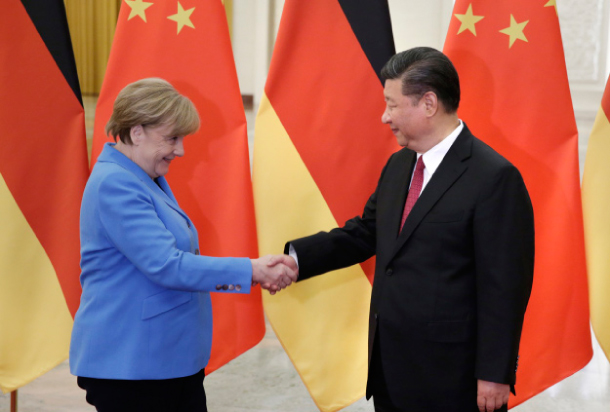 On July 10, the briefing room of the Chinese Foreign Ministry was more crowded than usual. Reporters wanted to know the whereabouts of Liu Xia, wife of the Nobel Peace Prize winner Liu Xiaobo, who died in 2017. Earlier that day, she was released from eight years of house arrest and left for Germany. Hua Chunying, the ministry’s spokeswoman, said Liu Xia went to Germany for medical treatment as per her wish.

A German reporter asked whether it was related to talks in Berlin between the Chinese and German governments, but Hua said she had no news to share. The New York Times reported that German Chancellor Angela Merkel might have intervened in Liu Xia’s case. Many Chinese have showed their appreciation for Merkel on social media.

On July 9, China and Germany held their fifth round of intergovernmental talks in Berlin. The event is essentially a cabinet plenum between the two countries. As many as 50 ministerial and vice-ministerial officials and business leaders attend. Past rounds have been held in 2011, 2012, 2014 and 2016. From the meeting, the two countries agreed on 71 points, including cooperation on so-called Industry 4.0 and smart services.

But Germany has not stopped checking China. At the Munich Security Conference in February, Sigmar Gabriel, Germany’s then foreign minister, said, “The initiative for a new Silk Road is not what some people in Germany believe it to be — it is not a sentimental nod to Marco Polo. Rather [it] stands for an attempt to establish a comprehensive system to shape the world according to China’s interests. It is not just about business and industry. China is developing a comprehensive system that is not like ours, not based on freedom, democracy and human rights.”

The remark touched on the hidden intentions of Chinese President Xi Jinping’s signature project. Gabriel warned that China and Russia were “constantly trying to test and undermine the unity of the European Union with sticks and carrots” and that the EU was standing at the crossroad of history between dictatorship and democracy.

It was Merkel who changed the focus of Germany’s China policy from economics to politics and human rights. When she visited Beijing in May, she met with the wife of Wang Quanzhang, a human rights lawyer who had been missing since July 9, 2016. A Chinese friend I recently met with spoke about China’s suppression of diversity and South Korea’s neglect of overseas human rights. “China is resembling North Korea, and Korea is resembling China,” he said.

Merkel has successfully managed to balance German diplomacy between economic concerns and human rights. South Korea, instead of hoping for China’s favor, should be more dignified. Our companies need to be more competent, and our citizens should be more determined. Germany can be a good model.