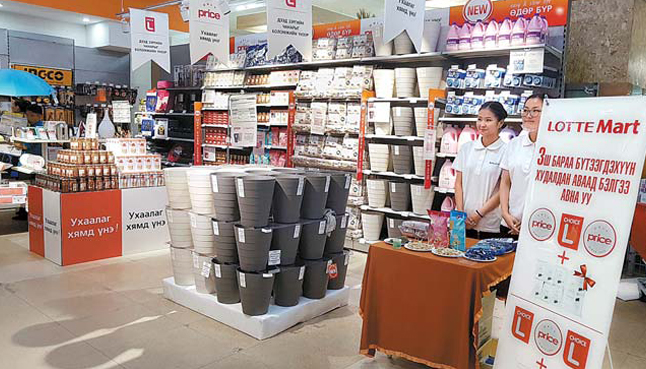 Lotte Mart is heading to the steppes.

The discount retailer announced Tuesday that it will launch a store in Mongolia by next year under a franchise contract with local company Nomin Holding.

Lotte Mart’s private-brand products are on the forefront of its move into the Mongolian market. In May, the company sent $30,000 worth of daily necessities and processed food from its private brands Only Price and Choice L to the country. They were sold at a department store and two supermarkets owned by Nomin in the capital city of Ulaanbaatar.

The consumer response was positive. Within a month of the launch, five more stores were selling Lotte’s private-brand goods. Nomin has placed an additional order, and Lotte will make two more deliveries of products to Mongolia this month. The second delivery, worth $40,000, will be sent today. Lotte plans to expand the scope of its product categories to fresh food and home meal replacements in its third delivery later this month.

Lotte Mart’s Chinese business was hit hard last year after China retaliated against Korea for installing a U.S. antimissile system. This gave the company a reason to expand into other countries, including Southeast Asia, where it aims to open 169 stores by 2020. Lotte Mart is focusing on countries influenced by Korean pop culture, which it believes will have a positive perception on Korean products. Mongolia is one of them.

Lotte said it plans to sign a franchise contract with Nomin Holding in November. If everything goes as planned, a Lotte Mart will open in Ulaanbaatar by the first half of next year. Nomin, established in 1992, is one of the largest businesses in Mongolia. It has franchise rights for global brands like L’Oreal, Mango and Century21 in the country.

Lotte Mart added that the launch of its private-brand products in Mongolia is a good opportunity for its suppliers, which are mainly small and medium-sized manufacturers.