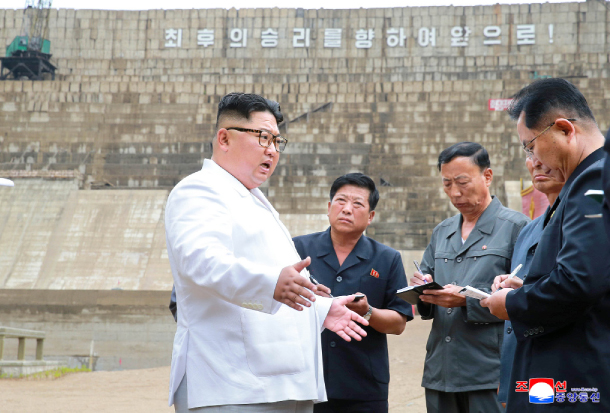 North Korean leader Kim Jong-un has been making more public visits to factories, farms and construction sites - and scolding officials in charge who are not keeping up to standards - in his push to focus on the country’s economic development.

The North’s state newspaper, the Rodong Sinmun, had extensive coverage of Kim’s tour. The Hamgyong trip followed a similar pattern of inspections in the past month, with the leader berating party officials and workers in the Pyongan region for subpar construction and management.

At a hydroelectric power plant construction site in Orangchon, North Hamgyong Province, Kim expressed his dissatisfaction with the project’s slow pace, the North’s wire service, the Korean Central News Agency (KCNA), reported. Only 70 percent of the plant has been completed after 17 years.

Kim “reprimanded the leading officials of the cabinet for leaving the project to the province only and not paying attention to it,” the KCNA reported. It is rare for Kim to openly criticize his cabinet, but he has been doing more of it in recent days. At the beginning of the month, he similarly chastised officials during a visit to a factory in North Pyongan Province. Some analysts see this as a tactic to pass on blame to the cabinet for the cash-strapped North’s failing economy as he pushes for reforms in his country.

According to the KCNA, Kim said the power station would “tangibly contribute to promoting the economy and people’s livelihood in North Hamgyong Province where industrial establishments are densely located,” and scolded officials responsible for the national economy for their negligence.

The KCNA also reported that Kim, after inspecting the management and operations at Onpho Holiday Camp, called the hot spring’s bathtubs “dirty, gloomy and unsanitary.” He similarly nitpicked at a construction site for the beachside Yombunjin Hotel. Work began in July 2011, but its exteriors and plasterwork remain unfinished. Kim said the Workers’ Party should step up to supply funding and materials for the project and called for the North Hamgyong Provincial Party Committee to finish the hotel by Oct. 10 next year, the KCNA reported.

At the Chongjin Bag Factory, Kim called out members of the North Hamgyong Provincial Party Committee on the shoddy quality of bags and called on them to “rectify” their faults.

Kim’s visits coupled with his diplomacy in the past few months suggest his keen focus on economic development. Since March, he has held three meetings with Chinese President Xi Jinping, and officials from the North have visited China several times to study the country’s economic reform policy.

Similarly, a day before his landmark summit with U.S. President Donald Trump, Kim went on a late-night tour of Singapore, where the meeting took place, to learn about the city’s growth.

Although stringent UN Security Council sanctions remain on North Korea, the United States has promised economic opportunities if the North is willing to give up its nuclear weapons. U.S. Secretary of State Mike Pompeo recently offered a Vietnamese model of economic prosperity for North Korea if it fulfills its denuclearization pledge. North Korean exports banned under Security Council sanctions include coal, textiles and seafood.

Kim was more complimentary at inspections of the Chongjin Shipyard, where the Mangyongbong-92 cruise ship was built, and a machine factory at the Ranam Coal-Mining Machine Complex.

At the factory, the KNCA reported on Tuesday that he stressed the importance of producing high-efficiency and modern machines to develop the national economy and North Korea’s machine-building industry. At the Raksan Offshore Salmon Farm and Sokmak Atlantic Salmon Pedigree Farm, run by the North Korean People’s Army, Kim praised the work of scientists researching fish farming.