Trump is in ‘no rush’ for North Korea talks

Trump is in ‘no rush’ for North Korea talks 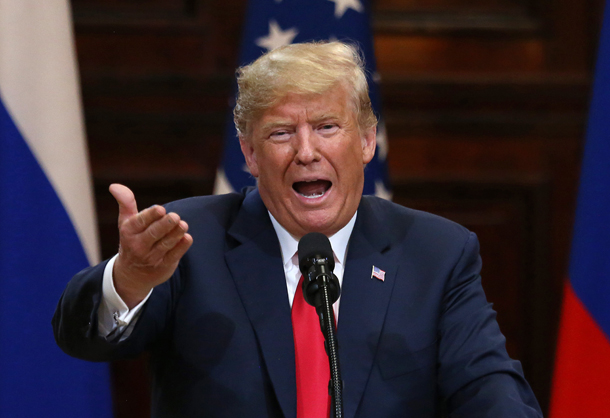 U.S. President Donald Trump said he is in “no rush” for denuclearization negotiations with North Korea in an interview Monday following his summit with Russian President Vladimir Putin in Helsinki.

“We’re doing well with North Korea, we have time,” said Trump on the pace of talks with Pyongyang following his June 12 summit with North Korean leader Kim Jong-un in Singapore. “There’s no rush, it has been going on for many years.

“I think a lot of good things are happening,” Trump said on progress following North Korea’s halting of nuclear and missile tests. “But President Putin is very much into making that all happen.”

U.S. Secretary of State Mike Pompeo, who made a visit to Pyongyang on July 6 and 7, told reporters afterward that a “good deal of time” was spent in his talks with the North Koreans on a timeline for denuclearization and a baseline declaration of their weapons of mass destruction, and that “progress” was made in the discussions.

However, Pompeo stressed that he does not “put a timeline” on North Korea’s denuclearization, seen as a negotiation tactic, while hard-liners in the administration like John Bolton, Trump’s national security adviser, has said that the United States could dismantle North Korea’s nuclear and ballistic missile programs within a year.

Trump said he and Putin will cooperate on the North Korea denuclearization issue following their summit in Helsinki Monday, stressing that nuclear proliferation is “one of the most critical challenges facing humanity.”

In a joint press conference after the talks, Trump said he briefed the Russian leader on his summit with Kim, adding, “I am very sure that President Putin and Russia want very much to end that problem. They’re going to work with us, and I appreciate that commitment.”

“We’re glad that the Korean Peninsula issue is starting to resolve,” said Putin at the press conference. “To a great extent, it was possible thanks to the personal engagement of President Trump, who opted for dialogue instead of confrontation.”

Putin noted that, “as major nuclear powers,” Russia and the United States “bear special responsibility for maintaining international security,” calling to “fine-tune the dialogue on strategic stability and global security and nonproliferation of weapons of mass destruction.”

Trump earlier told CBS News in an interview that aired Monday and was conducted on Saturday in Scotland, “This has been going on for many, many decades, but I’m in no real rush,” on the negotiations with Pyongyang. “I mean whatever it takes, it takes,” he added. “In the meantime, things are happening behind the scenes that are very positive.”

During the interview, Trump described the European Union, Russia and China as “foes” of the United States. But Trump was complimentary of the North Korean leader, noting that Kim moved quickly on the return of three American hostages to the United States, ahead of their summit, which he called “a very smart move on his behalf, because it really was a sign of good will.”

On Sunday, U.S. and North Korean generals met in the inter-Korean border village of Panmunjom and agreed on steps to enable the return of the remains of American soldiers killed in the 1950-53 Korean War. The recovery and repatriation of U.S. prisoners of war and those missing in action was agreed upon in the June 12 summit in Singapore between Trump and Kim, and was one of the key points in their joint statement.

“They’re in the process of doing it,” said Trump on the return of U.S. soldiers’ remains. “It doesn’t go quickly,” he said, adding that the repatriation of remains is a “complicated process” but that he knows “they would like to be able to do it, if they can.”

The president described a “Trump doctrine,” stating: “All over the world, we’re looking for peace. We’re also looking not to be ripped off as a nation.” He said that the United States is “perceived as a much stronger nation now than we were two years ago,” citing its stance on trade deals and also the reduced nuclear and missile threat from North Korea.

While Trump signaled that he is in no hurry to set a timeline for North Korean denuclearization, South Korean Foreign Minister Kang Kyung-wha is scheduled to meet with U.S. Secretary of State Pompeo in New York on Friday to discuss the latest developments regarding North Korea, according to the U.S. State Department.

Kang and Pompeo are also scheduled to jointly brief the member states of the United Nations Security Council on efforts by Seoul and Washington for the denuclearization and establishment of peace on the Korean Peninsula, said the South Korean Ministry of Foreign Affairs.

Noh Kyu-duk, spokesman for the South Korean Ministry of Foreign Affairs, said in a briefing Tuesday, “The consolidation of wholehearted support and cooperation of the UN Security Council and international community is necessary in order to realize the complete denuclearization and settlement of permanent peace on the Korean Peninsula, so we look forward to Minister Kang’s visit to New York as being a good opportunity for this.”

Kang kicks off her three-day trip to New York on Thursday. This marks Kang and Pompeo’s third meeting since the North-U.S. summit last month, following talks held in Seoul in June and Tokyo earlier this month.