Veteran of Roh gov’t takes on discord in LKP

Veteran of Roh gov’t takes on discord in LKP 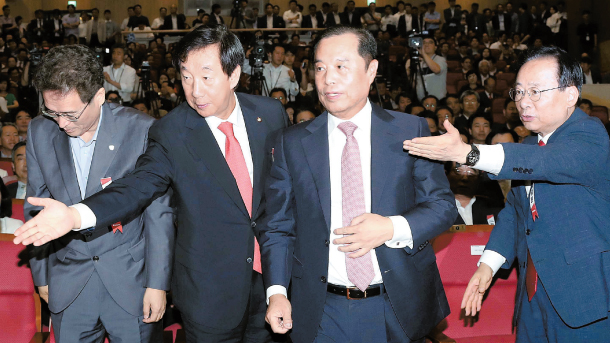 Kim Byung-joon, second from right, a key member of the former liberal Roh Moo-hyun government, is asked to walk up to a podium in the National Assembly Members’ Office Building in Yeouido, western Seoul, on Tuesday, to give his speech to accept the interim leader position and bring the main opposition Liberty Korea Party back from its worst electoral defeat last month. [YONHAP]

Kim Byung-joon, a key member of the liberal Roh Moo-hyun government, took charge of the main opposition Liberty Korea Party (LKP) Tuesday, with a mission to salvage it from its worst electoral defeat ever last month and the impeachment and removal of its former leader, disgraced president Park Geun-hye.

It is an improbable turn for both Kim and the LKP considering Kim’s central role during the liberal Roh government between 2003 and 2008.

Kim served in central posts such as the policy director, education minister and deputy prime minister for the liberal government.

“I have no factional power [within the LKP],” said the de facto leader of the conservative party that commands the loyalties of 112 lawmakers in the 300-member National Assembly. “I also don’t have authority for general election nominations since we are not having such an election anytime soon. But the people’s thin layer of hope in the LKP despite their deep disappointments is the power I have [to reform the party].”

The appointment of Kim, who has a PhD in political science from the University of Delaware, was approved at a meeting of party delegates held at the National Assembly.

Some 363 party delegates were at the meeting. Kim’s appointment as chairman of the LKP’s emergency committee was approved unanimously.

In his acceptance speech, Kim said he would try to lead the party away from factional infighting, which he said went “against the flow of history,” and ideological battles, and concentrate on policy debates.

“I have a dream of realizing politics defined by discussions of philosophy and a policy agenda for the future. To make the dream come true, I will do my best while putting the people first,” he said. He said he would “not tolerate party politics marked by factional strife and ideological battles,” adding he would change “many aspects of the party,” without elaborating further.

With Kim taking over the party as interim chief, the LKP launched its new leadership 35 days after its landslide defeat in the June 13 local elections, in which it lost all but two of 17 key races. In 12 by-elections for national lawmakers, it lost all but one seat, raising existential questions for the former ruling party.

It remains to be seen how successful Kim, who has never held elected office, can be in uniting a deeply divided party. There are already questions about how long Kim will remain in the post and when the party will hold a national convention to elect party leadership.

The next election is scheduled for April 2020, and it is through the power to give nomination to candidates that a party leader wields power.

While Kim served in key posts during the Roh government and was known as Roh’s policy architect, he was courted by conservatives in the past. In fact, he was nominated by former President Park in November 2016 to become prime minister in the middle of the corruption scandal that eventually led to her being removed from power.

In a news conference on Nov. 3, 2016, a tearful Kim said he had accepted the nomination because he could not withstand the “collapse of national affairs.”

Kim didn’t even get a parliamentary confirmation hearing due to the opposition’s refusal to consider his nomination. Park was impeached on Dec. 9 and was ousted from power through a Constitutional Court ruling on March 10, 2017.

How willing the ruling Democratic Party, successor to Roh’s own party, is to work with Kim in a bipartisan spirit also remains to be seen.

In what could be a harbinger of tough times ahead, Rep. Chun Jae-soo of the DP warned Kim Tuesday.

“As a fellow who once worked for President Roh at the Blue House, I have this to say about Kim because I know him too well,” said Chun in a Facebook post Tuesday. “Please do not mention President Roh while working for the LKP for your promotion.” Chun was secretary for protocol for the liberal president.