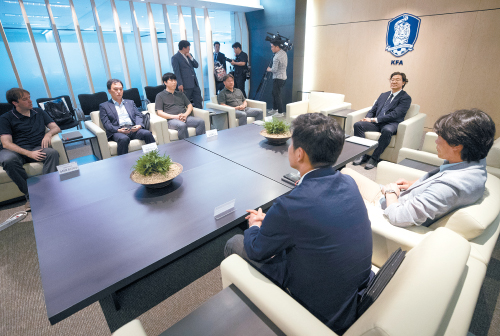 Korea has begun its quest to find a new head coach for the men’s national football team after suffering an early exit at the 2018 FIFA World Cup.

The KFA has been keeping mum on Kim’s destinations and coaches who he has contacted.

What’s confirmed at this point is that Shin Tae-yong, who led Korea at the 2018 World Cup, is also listed as one of the candidates. Shin’s contract with the KFA expires at the end of this month, but if the 47-year-old is selected again, he’ll sign a new contract and retain his seat.

Under Shin’s helm, Korea posted a win and two losses to suffer a group stage elimination at the World Cup in Russia. Korea opened the tournament with a 1-0 loss to Sweden and then a 2-1 defeat to Mexico that forced Shin into hot water. He, however, bounced back by stunning the defending champions, Germany, 2-0 in the final group match.

Following the review of Shin’s performance in Russia, Kim said the World Cup was “neither a success nor a failure” for Korea. In this regard, Kim insisted that Shin will be at the same starting line as everyone else, saying, “Just because we didn’t renew his contract [at this point], it doesn’t mean we didn’t give him a vote of confidence.”

Before leaving the country, Kim said that the KFA has shortlisted “fewer than 10 candidates” for the position with hopes of finalizing the process before friendly matches in September.

Speculation has been rising for Korea’s selection for the new coach, with local media releasing reports with names like Luiz Felipe Scolari, who led Brazil to victory in the 2002 World Cup, and Vahid Halilhodzic, former Japan head coach. The KFA, however, denied approaching these coaches, asking for the local press’ cooperation in not releasing speculative reports.

Kim did mention criteria for the coach selection. He said that Korea will try to find a coach who can meet the quality of the country’s national team that has reached the World Cup finals nine consecutive times.

“We hope we can have a coach who has experience with World Cup qualifications, winning a continental tournament and holding a trophy in top-class leagues,” Kim said at a press conference earlier this month. “We also need a coach who can meet our football philosophy.”

Pundits said that Korea will have to bring in a coach - whether local or foreign - who can create a legacy and add assets for Korean football like Guus Hiddink did in 2002.

Korea reached the 2002 World Cup semifinals under Hiddink, the best performance by an Asian country in the tournament’s history.

“We had success with Hiddink at the 2002 World Cup, but his training methods and tactics helped Korean football even after he left our national team,” said Hahn June-hea, an analyst at local broadcaster KBS. He is also a member of a subcommittee under the national team coach appointment committee.

“Our national team getting good results is important, but we also need a coach who can change and upgrade the country’s football in general,” he said.

Hahn added that it’s also important to check the backroom staff that a coach brings with him. He pointed out what Korea went through with Uli Stielike, who was sacked during the final Asian qualification round for the 2018 World Cup.

“Stielike brought only one staff member with him, which was [Carlos Alberto] Armua, who was no more than a fitness coach,” he said. “We have to check the professionalism and the careers of staff members that a coach brings to this team, because in modern football, everything is categorized and needs experts in each field.

Pundits, however, warned that impressive resumes don’t always mean success. Although high-profile coaches will cost a lot of money for the KFA, they said what really matters is their style and experience matching Korean football.

“I think we need a coach who has the experience of lifting a mid-level team to a top class one,” said Kim Hwan, a football commentator at JTBC. “Instead of a coach who only has managed big clubs with superstars, we should bring a tactician who can make Korea play better in things that they can do best.”

Kim said it’s not right to say that Shin has a zero percent chance of remaining at the helm, but it is likely that the KFA hires a foreign coach.

“I believe Shin is the last resort for the KFA,” he said. “If negotiations with top foreign candidates on the list fall through and there’s only a few coaches left who have similar careers like Shin, we can’t know for sure … but considering the current public atmosphere, it is likely that the KFA will go for a new face.”