Food prices on the rise as labor costs increase

Food prices on the rise as labor costs increase 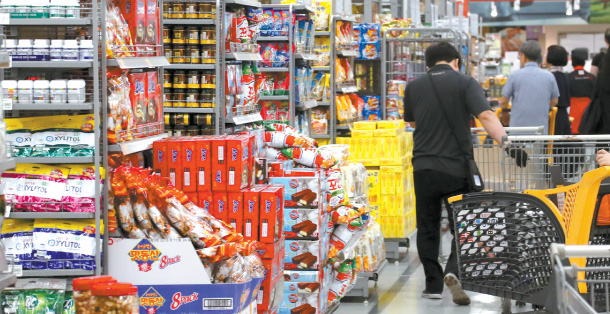 Prices of processed food and cost of dining out have been on a constant rise this year due to a rise in minimum wage and raw material cost. [YONHAP]

Prices of processed foods and eating-out costs in Korea have been rising sharply this year due to increased labor and raw material expenses, industry sources said Wednesday.

According to the sources from the convenience store industry, Ottogi, Korea’s second-largest maker of ramyeon, raised prices of 16 processed foods, excluding ramyeon, by up to 27.5 percent last month.

Early this month, noodles and beverage maker Paldo jacked up prices of its canned rice drink and persimmon punch by slightly over 11 percent.

In the wake of the increased minimum wage, eating-out costs have risen over the past year as restaurants, which rely on part-time workers, pass increased expenses on to customers.

According to the Korea Consumer Agency, seven out of the eight dishes most favored by South Koreans when eating out saw their prices go up over the past year.

A bowl of cold noodles, or naengmyeon, carried a price tag of 8,808 won in the Seoul metropolitan area in June, up 10.6 percent from the same month a year earlier and marking the biggest gain.

The second-largest gainer was samgyeopsal, or pork belly. The price of pork belly came to 16,489 won per 200 grams (7 ounces), up 5.6 percent from a year earlier.

Meanwhile, a bowl of jajangmyeon, or black bean sauce noodles enjoyed by most Koreans, fetched 4,923 won, the same as last year.

Korea’s overall consumer prices, however, remain tamed. The country’s consumer price index climbed 1.5 percent in June from a year earlier, well below the Bank of Korea’s target of 2 percent for the year.