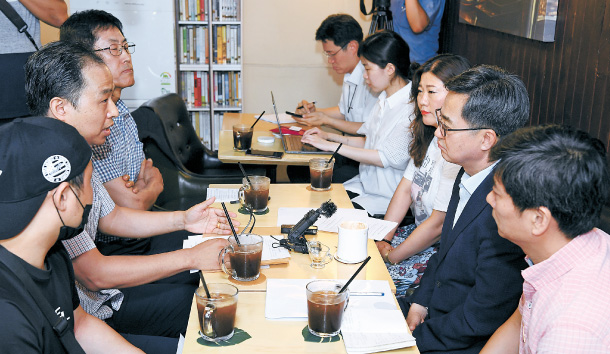 Finance Minister Kim Dong-yeon, second from right, holds a meeting with small business owners on Wednesday at a cafe located in Seodaemun District in western Seoul to hear more details of the inconveniences that are rising from the controversial minimum wage hike. [YONHAP]

Senior officials from the Finance and Industry Ministries scrambled to assuage small business owners Wednesday in the face of growing concerns over next year’s minimum wage hike.

Finance Minister Kim Dong-yeon, who has constantly raised a dissenting voice against the steep hike in the minimum wage, held a meeting with the members of a group that represents the owners of small restaurants and other shops in Seodaemun District, western Seoul.

They also requested that the government create a research institute dedicated to small business owners.

The finance minister acknowledged on Monday that the minimum wage increase will put a burden on Korea’s economy.

A director general at the Ministry of Industry, Energy and Trade met with the executives of six convenience store chains - GS25, 7-Eleven, CU, Emart24, Ministop and C-Space - to hear their concerns.

Convenience store operators are thought to be hardest hit by the minimum wage decision as they tend to heavily rely on part-time workers.

Details of the discussion were not revealed as of press time.

Korea’s convenience store owners have called on the government to apply a different wage standard to small businesses, and industry insiders expect the chains to have continued to push this proposal in their meeting with Moon Seung-wook, director general of the ministry.

The national association of convenience store owners threatened to launch collective action, including store closures and hike product prices, as a result of the increase in the minimum wage, but retreated on Monday.

Instead, the group unveiled a set of proposals including applying different wage standards to businesses with less than five employees and lowering their royalty fees and card commissions.

In response to the criticism, the government has introduced multiple support measures including subsidies worth 3 trillion won and a platform to lower card commission fees.