After minimum wage hike, some are making less

After minimum wage hike, some are making less 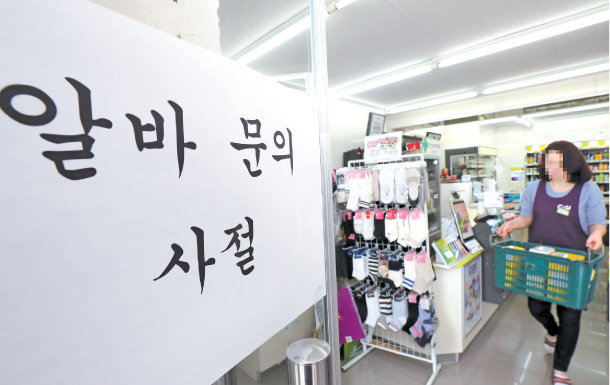 A sign at a convenience store in Dangjin, South Chungcheong, reads, “Will not accept part-time job inquiries.” The owner says family members have been helping her run the store during the weekends because she can no longer afford to pay workers. [YONHAP]

But after the government raised the minimum wage, the restaurant laid off half the staff and reduced the hours of remaining employees. Now, Mr. Shin only works four days a week for four to five hours each day. He makes about 700,000 won a month.

To make up for the loss, Mr. Shin works a two-hour shift at a logistics company every morning. “Life has gotten more stressful,” he said, “and my body is more tired from working two separate jobs.”

Raising the minimum wage a record 16 percent to 7,530 won was supposed to improve conditions for Korea’s lowest earners. Instead, it has made life harder because small businesses, like restaurants and convenience stores that typically pay the minimum wage, have been cutting back on labor. Many workers, like Mr. Shin, have resorted to working multiple part-time jobs.

In Changwon, South Gyeongsang, Mrs. Kim, the owner of a traditional Korean restaurant, had to let go of two workers in April because she couldn’t afford them anymore. Each of them was making 2 million won a month working four days a week from 10 a.m. to 10 p.m. After the wage increase, their monthly salary went up to around 2.35 million won.

Unable to retain their services, Mrs. Kim now uses a part-timer who is paid by the hour, but even the part-timer only works three times a week during the busiest shift of the day.

One of Mrs. Kim’s other employees, Mrs. Jeong, works an additional job at a tuna restaurant every evening after her shift at Mrs. Kim’s restaurant ends. But her combined salary from these two jobs only amounts to 1 million won a month. She says people like her have not benefited from the minimum wage increase. Instead, they have more trouble finding jobs.

Another restaurant owner in Changwon, Mr. Son, trimmed his staff from six to two after the wage increase in January. To keep up with demand, he has resorted to asking his in-laws to work shifts at his restaurant. Mr. Son says the workload has given him no choice but to use family members who are not financially compensated for their labor.

In some cases, employers have opted not to use people at all. Mr. Park, who runs a small auto parts supplier at the Daegu Seongseo Industrial Complex, recently bought a machine from China that set him back 190 million won, but he believes the investment is worthwhile if the government really does keep to its target of a 10,000 won minimum wage by 2020.

By supplanting human labor, Mr. Park says he can easily make up for the costs he would have had to pay his workers otherwise. Automation has become increasingly common in retail locations, too. Unmanned convenience stores and self-service gasoline stations are popping up as business owners are giving up on hiring people.

The jury is still out on the minimum wage increase. “Some of my friends still do not receive minimum wage,” said Kim Chan-yoo, a 24-year-old college student who works a part-time job. “At least part-time workers will face fewer difficulties if the wage floor is raised.”

Lee Chang-yup, head of People’s Solidarity for Participation and Autonomy in Chonbuk, a civic organization that works to revitalize local economies, said that criticism of minimum wage increases will only lead to further conflict.

“The real discussion should be about preventing building owners from unilaterally raising rent or cost sharing between the government, consumers and laborers through methods such as lowering credit card use fees,” he said.

The Korea Development Institute, a government-sponsored think tank, has a different diagnosis. In a June report on the effects of the minimum wage increase on employment, the institute estimated that over 144,000 workers would lose their jobs if the minimum wage went up to 10,000 won by 2020.

“Before raising wages, the government should have taken into account the voices of small business owners who wanted gradated wage increases based on different sectors and business sizes,” said Koo Jeong-woo, a sociology professor at Sungkyunkwan University.

Lee Jung-hee, a professor of administration at the University of Seoul, warned that workers in less stable jobs have much more to lose than their salaried counterparts in the job market.

“An alternative could be leaving wage levels to the market’s discretion while giving government subsidies to low-income workers,” he said.