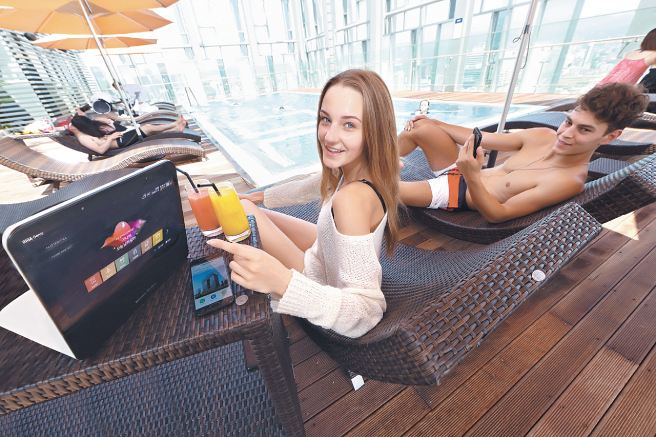 Models introduce the KT’s hotel version of its GiGA Genie voice assistant as well as its Genie Phone, offered to hotel guests, at the rooftop of the Novotel Ambassador Hotel & Residence in Dongdaemun, central Seoul on Wednesday. [KT]

Almost instantly, CNN appeared on the TV inside a room at Novotel Ambassador Hotel & Residence in Dongdaemun, central Seoul, Wednesday.

The assistant is a version of GiGA Genie, KT’s AI speaker. It is the first English-speaking voice assistant to be introduced at a Korean hotel, according to KT. The mobile carrier hopes the assistant will learn Chinese and Japanese within this year to serve more foreign visitors to Korea.

“Genie-ya” is the AI assistant’s wake word. Genie can perform about 200 different tasks, according to a KT spokesperson. It can find certain networks on TV without knowing what the channel number is, request amenities from the front desk and can play music using KT’s free Genie Music streaming service.

The hotel version of the GiGA Genie looks different from the cylindrical models currently on sale. KT designed it with a touch screen in case users are not familiar with using voice assistants. The hotel models come with a 10.8-inch liquid crystal display along with the original voice-assistant features of GiGA Genie, which first hit the market in January 2017. 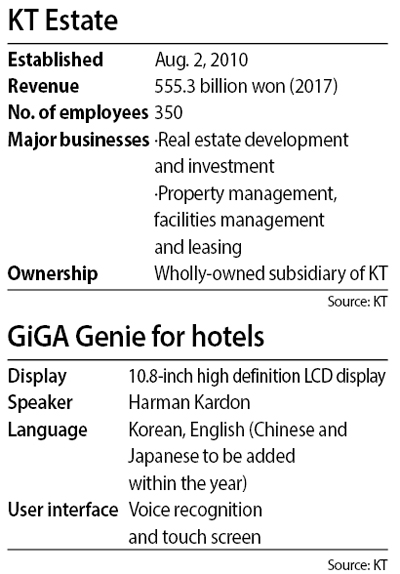 Baek Gyu-tae, the senior vice president of KT’s Service Lab Institute of Convergence Technology, said the assistant showed 85 percent accuracy in understanding English in its pilot tests, but said that company aims to bring that percentage up to about 95 percent. According to Baek, the assistant has about 90 percent accuracy when listening to Korean.

Kim Chae-hee, the senior vice president of KT’s AI business unit, said KT will continue to target hotels, as customers are increasingly looking for services that don’t require them to interact with others face to face. Genie can also help people trouble with adjusting to room settings, such as determining what each light switch controls.

KT is also introducing a product called Genie Phone as part of the mobile carrier’s smart concierge service. The Samsung phones will be offered to hotel guests and are filled with useful apps for tax refunds, navigation and room controls. The phone can control room settings just like the GiGA Genie assistant can do, but it doesn’t respond to voice commands.

The phone is aimed at non-Korean visitors, and KT offers free wireless internet connections for the phone. International calls will also be free for the time being. KT said the rates have yet to be fixed. The phones are offered only during travelers’ stays.

KT and its property management affiliate KT Estate will continue to place AI assistants at hotels as part of its push to expand AI into the hotel industry, the companies said.

The newly opened Novotel hotel is managed by Accor Ambassador Korea but owned by KT Estate. KT Estate will open up more hotels in partnership with famed hotel operators to learn from their hotel management expertise, and will equip these hotels with its own telecommunications technologies.

KT Estate plans to open four hotels in Seoul’s downtown area by 2022 in partnership with hotel brands such as Hyatt’s Andaz and Marriot. One hotel will be built near Apgujeong station in southern Seoul next year, another by June 2021 in Songpa District, southern Seoul, and the fourth one will open in April 2022 in Myeong-dong, central Seoul. SK Telecom is also expanding into the hotel realm, as it placed its Nugu voice assistants in the Walkerhill Hotel in eastern Seoul.

Kim said business-to-business market opportunities for voice assistants will continue to grow, and the company is interested in bringing GiGA Genie to hospitals and senior care centers.