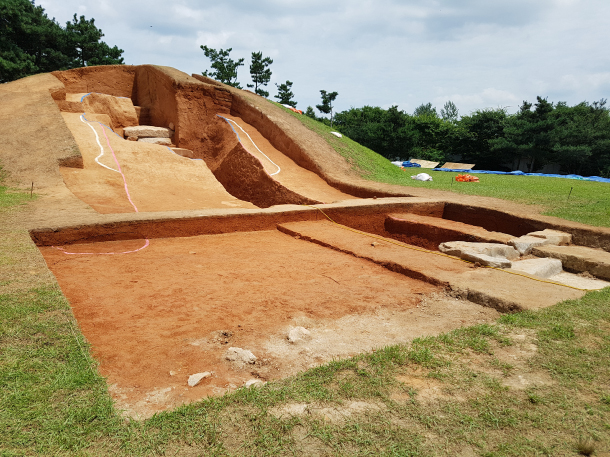 The Iksan Ssangneung, or the twin tombs of Iksan, in North Jeolla, has undergone a series of investigations starting last August, and opened the site to the local press on July 11. Of the two, the bigger tomb named Daewangmyo is where King Mu of Baekje is suspected to have been laid to rest, with his queen lying 180 meters away inside Sowangmyo. [YOON SO-YEON]

According to the lyrics of Korea’s oldest folk song “Seodongyo” and the tale that follows it, King Mu (unknown-641 A.D.) of Baekje (18 B.C.-A.D. 660) and his queen Seonhwa met when the princess was kicked out of her palace in Silla (57 B.C.-A.D. 935) after the young commoner spread rumors that she had secretly opened her window every night to let him into her room. The two fell in love straight away, and with the help of Seonhwa, the young man gained riches and eventually became the 30th king of Baekje. The king is said to have built the Mireuk Temple, and was later buried next to his queen.

The Iksan Ssangneung, or the twin tombs of Iksan, North Jeolla, had long been presumed to belong to King Mu and his wife, based on the size and the structural features of the tomb, which resemble the tombs in Neungsan, Buyeo in South Chungcheong.

But the most solid evidence yet was revealed when human bones were found at the site in April. The Cultural Heritage Administration disclosed the results of analysis on the bones to local press on Wednesday morning, through which researchers determined that they belonged to an old man who died in the seventh century.

But this is the first time since then that researchers have officially taken the chance to dig into the ground and open up the tomb.

The Buyeo National Research Institute of Cultural Heritage (BCH) began excavating the bigger tomb, named Daewangmyo or the big royal tomb, last August. Most of the important artifacts, such as the wooden coffin, had been taken out by the Japanese, but human bones left behind in a wooden box made of nut pine were discovered in April.

Buyeo National Research Institute of Cultural Heritage, under the supervision of the Cultural Heritage Foundation, analyzed bones found inside Daewangmyo in April, right. At left are bones that were revealed to the press on Wednesday, with replicas of some bones on the left, and actual bones on the right. [YONHAP, CULTURAL HERITAGE FOUNDATION]

“People back then probably didn’t think of human bones as archaeological evidence and just left them behind [after the 1917 excavation],” said doctor Lee U-young of the department of anatomy at The Catholic University of Korea.

“We took the biggest bones that had kept their shape and were the least damaged for testing. The [person] was at least over 50 when they died, presumably around his early 60s.”

The angle of the elbow bones, the size of the talus (a bone above the ankle) and the femur point to the man being between 161 centimeters (5 feet 2 inches) and 170.1 centimeters tall - quite tall considering that the average height of Korean men during the Joseon dynasty (1392-1910) was 161.1 centimeters. Many of the bones were ossified, meaning that the cartilage had become stiff due to age, putting the man at an age somewhere between 60 and 70. Radiocarbon dating of the bones calculated the death date at around A.D. 620 to 659, a timeline that matches King Mu’s recorded death.

Despite the evidence, it is still hard to definitively assign the tomb to King Mu without DNA results, which would provide the strongest proof. “The bones were too corroded to go through DNA testing, which could have destroyed the bones,” said Dr. Lee.

“Only King Mu meets all these conditions,” said Lee Sang-jun, director of the BCH. “Nevertheless, we cannot conclude that this is King Mu’s tomb, although all the evidence points to it. The bones could be a collection of bones from other people - although it isn’t likely. Similarly, even if we find bones in the Sowangmyo (the smaller of the twin tombs), we cannot say that they belong to Queen Seonhwa.”

In 2016, the Jeonju National Museum analyzed four teeth that were stuck in the wooden coffin taken out from Daewangmyo in 1917, and presented them as belonging to “a female aged between 20 and 40,” buried with earthenware from the Silla Dynasty - suggesting that the tomb belonged to the queen instead of the king.

However, experts have also argued that the earthenware was similar to those found in regions near Iksan. The latest research included a new analysis of the teeth for comparison, and saw that it was more likely that the teeth did not belong to a female.

According to director Lee, the research team will begin investigating the smaller tomb next year.