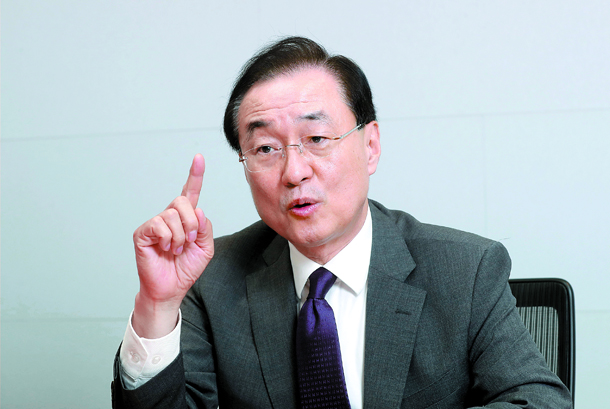 The trade war between the United States and China shows no signs of slowing down. Right after the United States imposed 25 percent tariffs on ＄50 billion worth of Chinese goods on July 6, China retaliated with similar measures. On July 10, the Trump administration announced plans to impose 10 percent tariffs on an extra ＄200 billion worth of Chinese imports, and Beijing responded by vowing to return every single blow. Bark Tae-ho, professor emeritus at Seoul National University, says that the United States has diagnosed the problem well, but is choosing the wrong way to solve it.

“It’s good that the U.S. is challenging China’s questionable trade practices, but they’ve chosen the wrong way to do so,” Bark said. “If China ends this with a ‘fake surrender’ by simply decreasing their surplus from their trade with the United States instead of discarding their unfair trade practices, the global trade order will be disrupted.”

Bark Tae-ho majored in economics at Seoul National University and earned his Ph.D. from the University of Wisconsin-Madison. He has experience working for the Korea Development Institute and the Korea Institute for International Economic Policy. As trade minister under the Ministry of Foreign Affairs in 2011, he worked on implementing the United States-Korea Free Trade Agreement, which had just come into effect, and oversaw negotiations over the China-South Korea Free Trade Agreement. Now professor emeritus at Seoul National University, Bark is also president of the Lee & Ko Global Commerce Institute. Below are edited excerpts from the JoongAng Ilbo’s interview with Bark.

Q. Did you see this U.S.–China trade war coming?

A. I doubted my own suspicions. Most distinguished economists did. I met Nobel laureate Paul Krugman a while ago, and he said that he didn’t expect this until a month before.

How do you expect this to unfold?

It’s really a race against time. Trump will force more attacks to gain traction in the midterm elections in November. The conflict will only get bigger if China doesn’t make concessions, like increasing imports from the United States. This will only become harder for both countries as domestic prices rise as a result of the tariffs. Although we have seen some impact, like Harley-Davidson moving some production overseas, the average American customer cannot feel it yet. We’ll have to see when the negative impact becomes serious.

Doesn’t the United States have a history of being hurt by imposing tariffs like this?

In 1930, during the Great Depression, it passed the Smoot-Hawley Tariff Act, which increased tariffs by an average of 30 percent to 60 percent. That only ended up hurting domestic industries, so four years later, it made a trade law for the first time to lower tariffs again. It’s been historically proven that there are no winners in a trade war.

Why is Trump going for a trade war with China then?

I see it as a political move. He needs an intuitive narrative that will speak to his base in the Rust Belt [a region of the northern United States where industry declined in the 1980s]. Trump claimed throughout his campaign for presidency that Chinese and Korean products were taking away American factories and jobs. It’s like he puts his base’s support above what’s good for his country. It’s simpleminded and irrational.

Trump’s go-to trade policy is discussing things head-to-head. Does he care about the World Trade Organization (WTO) at all?

Unfortunately, no. He’s pushing for head-to-head solutions for both the United States-Korea Free Trade Agreement and the North American Free Trade Agreement (Nafta). Trump knows that the WTO’s multilateralism can’t give him what he wants. The WTO hosts a meeting for ministers of commerce every two years, but in 2017, it couldn’t even decide upon on a joint declaration because the United States opposed it.

Wasn’t the United States a key force in making the WTO?

The WTO was made to replace the General Agreement on Tariffs and Trade, which was made in 1947, right after World War II. The U.S. was trying to build a trade order around intellectual property law and the service sector because the country’s focus was shifting from manufacturing to the service industry. But it was hard for the United States to exert dominance over the WTO as it votes on the principle of “one country, one vote.” That’s why the Doha Development Round, which started in 2001, famously floundered. So the United States has been stalling the WTO since the Obama administration.

How is the United States ruining the WTO’s dispute settlement function?

Appeals to the dispute settlement system are considered by the WTO’s appellate body, which consists of seven members elected for a four-year term. The United States is objecting to filling its empty positions. Only four members will be left by September, and they need at least three to make a decision. So many cases have already fallen through the cracks. By December 2019, only two members will be left and the appellate body will be rendered completely useless.

Does the United States have an alternative? Do they just want a “survival of the fittest” situation?

It used to during the Obama administration. The Obama administration pushed for the Trans-Pacific Partnership (TPP) to the west and the Transatlantic Trade and Investment Partnership (TTIP) to the east to serve as checks to China and take hegemony in the service industry. But both of them have been practically scrapped as Trump pulled away from the TPP and the United Kingdom decided to leave the European Union. Both platforms that the United States had for reasonably maintaining its leader status are now gone. The only thing that’s left is a head-to-head resolution in classic Trump style.

I don’t think it will. The United States may be a superpower, but not as much as it was in the old days. It hasn’t got many allies either. It could only force the Plaza Accord on Japan in the 1980s because it had European allies. Things are different now. The United States’ oldest allies have turned their backs after the Trump administration forcibly imposed tariffs on steel and auto imports and pushed to renegotiate Nafta.

That’s what I’m worried about. China could propose decreasing its surplus from trade with the U.S. through a massive purchase of American products. Trump would likely accept that. But that’s just a fake surrender. The problems will still be there and their side effects will only get worse.

The problem with China is not its trade balance but its unfair trade practices. They have no respect for intellectual property, force technology transfers out of foreign corporations and hand out too much in government subsidies. Even if China balances its trade by importing more, that would just be a temporary solution that does nothing to solve the root cause of the problem. That would be like putting a tiny Band-Aid on a huge, untreated wound. The problem cannot be solved without an international agreement based on fair trade. A head-to-head conflict with Trump will only give China an easy way out.

We should keep the WTO as the base for reinvigorating regional trade agreements. The WTO can take care of general laws, and we can leave the special laws to regional trade agreements. But that will be hard, especially with the United States, which should be leading this change, being so uncooperative. Countries like Korea that are relatively unaffected by the major superpowers should more actively lead this change.

There’s been a lot of backlash from Americans in response to the trade war, but some Americans seem to be supporting Trump.

Most of these people are people who have experience forcing other countries into trade deals in the 1980s. Robert Lighthizer, the current United States trade representative, is one of them. He forced a quota on Japanese car imports during the Reagan era. People like him believe that those tactics that worked 30 years ago would still work now. Peter Navarro, Trump’s director of trade and industrial policy, is a well-known critic of China. Many other experts and leader groups are in tacit agreement that there needs to be a check on China’s growth.

The Korean economy depends on globalization. What happens if multilateralism is weakened, or worse, destroyed?

We cannot survive without globalization. Our gross domestic product (GDP) is 1.9 percent of the entire world’s. It’s not small but still not enough for us to survive on our own. In order to continue exporting, we will constantly have to move our production sites where we can avoid trade conflicts. China and the United States are two countries that we trade the most with, and many of our goods are exported through China. We could be severely impacted by a trade war between these two countries. We also need to change the way we trade with China. Right now, most of our exports are intermediary goods for manufacturing. We need to export more consumer goods that will be popular with Chinese people, like cosmetics, ginseng and other luxury foods. Of course, we should also think more about the items we export and diversify the market.

We need to recognize the expertise of trade organizations and nurture them. The Office of the Minister for Trade was a semi-independent office under the Ministry of Foreign Affairs for 15 years until the Park Geun-hye administration moved it under the Ministry of Trade, Industry and Energy. The decision was made in January 2013 under the presidential transition committee, and I only learned of it after watching the news. They didn’t tell me, the head of the office they were transferring, anything in advance. I protested to the transition committee right away, but everyone said they didn’t know who was responsible for the decision. They don’t know the first thing about commerce, so they don’t know how to run the office either. With people constantly going in and out, the office has lost much of its structure and expertise. Another thing we should focus on is making the most out of free trade agreements, which are our strong suit. We have 15 free trade agreements with 52 countries. That’s 73.2 percent of the world’s GDP. Korea is the only country that has free trade agreements with both the United States and the European Union.

Are there any problems with the way the current administration is dealing with the situation?

Kim Hyun-chong, the current trade minister, is an expert who is capable of handling this situation well. Korea wasn’t at a disadvantage either with the renegotiation of the United States–Korea Free Trade Agreement. But the position’s title can be a bit wonky, and makes the trade minister a deputy in the Ministry of Trade, Industry and Commerce but the highest person in trade outside of the ministry. I wish they would clarify the standing of the position.