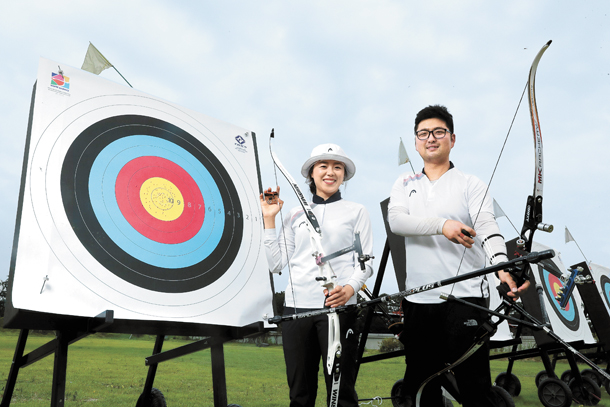 Chang Hye-jin, left, and Kim Woo-jin pose next to the target at an archery field at the National Training Center in Jincheon County, North Chungcheong on July 10. [WOO SANG-JO]

For hundreds of years, Korean soldiers relied on their gakgung, or Korean horn bow, to ensure victory in battle. Today, Korean archers still dominate, although their field of battle has changed dramatically.

This August, Korean archers will take to the field again, this time at the 2018 Asian Games, with the aim of winning every gold medal available. An ambitious goal, but one that shouldn’t be out of reach for a country that already has 38 archery gold medals from the Asian Games alone.

Over the past 30 years, Korea has established itself as the top archery country in the world, winning 23 golds at the Olympics and 56 golds at the World Championships. Korean archery is so competitive that many archers think that the national team qualifier is more difficult than the international events.

Korea continued its form at the 2016 Rio Olympics, winning all four gold medals - and one bronze for good measure. Only two of those archers, Kim Woo-jin and Chang Hye-jin, managed to earn a spot at the Asian Games by winning the men’s and women’s qualifiers in April. Both Kim and Chang won gold medals in Rio, Kim in the team event and Chang in both individual and team.

Kim and Chang are legends in Korean archery. Despite rapid turnover in the Korean team, the two gold medalists have held their spots for years, Kim since 2009 and Chang since 2010.

But success in Korean archery comes at a price.

“While people go to cafes and watch movies at night in normal life, we restrain ourselves from all of that,” Chang said. “We do get depressed, but we got over it, and now, we have got to this point.”

During the first Archery World Cup event in Shanghai, China, in April, Kim and Chang managed to win three golds. The secret to their success? A huge amount of confidence.

“When I’m competing, I consistently remind myself to shoot without any regrets,” Kim said.

“[I tell myself to] shoot with confidence,” Chang said.

Chang and Kim will be joined by six other archers to represent Korea at the Asian Games, totaling four men and four women. All eight will compete in the individual events but will have to compete with each other for a spot in the team events and the newly added mixed event.

The team events - one each for male and female archers - have three athletes on each team, meaning one male and one female archer will not make the cut. Only the top female and male archers, based on the results from three Archery World Cup events and the qualification round of individual matches at the Asian Games, will compete in the new mixed event.

Ahead of the Asian Games, the Korean archery team’s motto is “one team.” Though they are competing against each other for a spot in the mixed and team events, they consistently encourage each other and tell each other to try their best.

Kim and Chang have teamed up in the mixed team event at the World Cup this season, winning gold and silver.

“Our style is to shoot fast and pressure the other teams,” Kim said. “In this sense, the games I played with Hye-jin worked out well.”

Their success at the World Cup has raised expectations that Kim and Chang will compete in the mixed event at the Asian Games, hopefully adding another gold to the Korean team’s medal count.

“When I wasn’t playing well, Woo-jin led me well,” said Chang. “We had good teamwork during the tournaments. During the second World Cup we won silver by losing to Japan. So that motivated me to prepare better for the Asian Games.”

The duo has high expectations for this year’s games.

“A perfect game,” Kim said. “I want to play a game that can be remembered for a long time.”

“I want to break the camera lens at the center of the target,” Chang said. “If I do that, I will have a good result.”