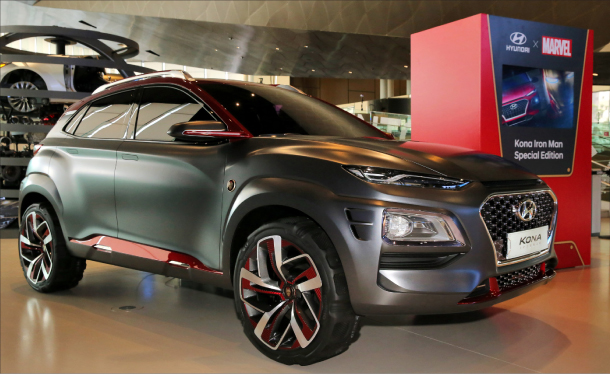 Iron Man is a Marvel character, the alter-ego of arms merchant Tony Stark, and the most successful role played by actor Robert Downey Jr.

And soon, Iron Man will be an SUV.

After coming up with a concept vehicle inspired by the superhero character last year, Hyundai Motor, the nation’s largest automaker, announced Thursday that it will launch a mass produced model of an Iron Man Kona SUV next year. 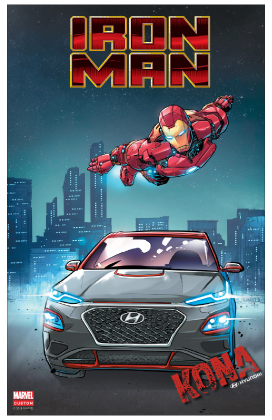 A poster advertises a mass-produced version of the Iron Man Kona SUV, which will go on sale as a limited edition in the first half of 2019. [HYUNDAI MOTOR]

Hyundai Motor displayed the Iron Man Kona SUV at the opening ceremony of Comic-Con, a comics convention, on Thursday in San Diego, California.

This is the first time Marvel has licensed one of its characters to an auto company.

The special edition will go on sale in the first half of 2019 and the company will take orders from anywhere in the world. But to maximize the model’s exclusivity, Hyundai Motor will only accept a single order during a specific time period.

The exterior will resemble the original Iron Man suit from a 1963 Marvel series entitled “Tales of Suspense.” It will be matte gray but with a hint of the red used for the Iron Man suit in the movies.

The vehicle will have a Marvel logo on the front hood as well as distinctive daytime running lights inspired by the Iron Man mask. The SUV will also have 18-inch two-tone wheels topped with a specially designed wheel cap. On its door, it will have the logo of Stark Industries, the fictional armament company run by Tony Stark.

Iron Man elements will be in the interior as well. The seat, which will be gray and red, will be decorated with the Iron Man mask and logo. The vehicle comes with a specially designed gear shift knob.

“The reason why Iron Man is a perfect fit with the Kona is that the small SUV emphasizes safety technology for urban lifestyle,” said a Hyundai Motor spokesman.

“We have the slogan ‘Urban Smart Armor,’ and that went well with the Iron Man image.”

The special edition will be available in Korea as well.