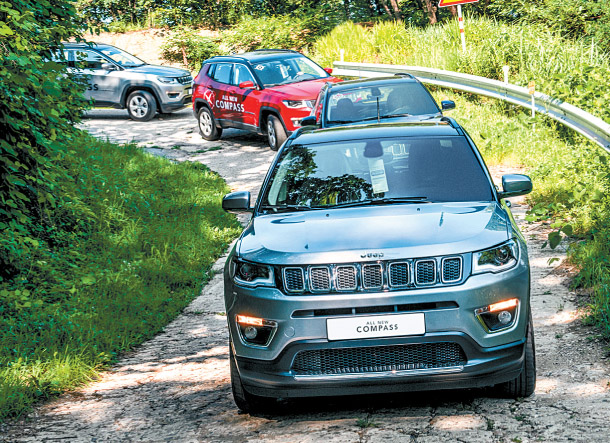 Jeep launched a fully revamped version of its compact Compass SUV on Tuesday for the first time in 10 years. [JEEP KOREA]

PAJU, Gyeonggi - Until now, the American SUV brand Jeep hasn’t been much of a factor in Korea’s automobile industry. The short history of Korea’s imported auto market has been dominated by pricey luxury automakers.

Now, however, things are changing for the storied off-roader marque.

Jeep’s rough-and-ready image is helping it ride the SUV boom across the world, including in Korea. 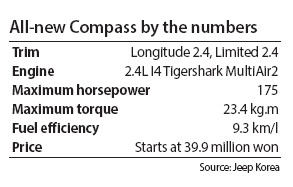 The Korea JoongAng Daily got behind the wheel of the new Compass on Tuesday and took it on an hour-and-a-half drive from highways to winding mountain roads.

We also got a sneak peek into the capabilities of the SUV’s four-wheel drive system on a mini off-road course that included moguls, mud puddles and bumpy roads sprinkled with pebbles and sand.

This reporter initially thought the Compass would be a little unrefined, considering that Jeep focused on off-road-ready SUVs. However, the Compass had a smooth ride, and little noise entered the cabin from either the engine or the outside.

While cruising around 130 kilometers (81 miles) an hour, the Compass was quiet and responsive when accelerating and slowing down.

When the speed went over 130 kilometers an hour, however, the road noise suddenly intruded. At that point, the driver and passenger had to shout to talk to each other.

After an hour’s drive, we arrived at rugged mountain roads usually filled with soldiers on training exercises. The road was narrow, steep and curvy, but with the help of the car’s nine-speed automatic transmission and agile steering, a full line of Compass SUVs safely passed the harrowing road. According to Jeep Korea, the Compass is the only model in the segment available in Korea that’s equipped with a nine-speed automatic transmission.

The brand’s signature four-wheel drive served well at the mini off-road course where, under the guidance of an expert, the reporters experienced a diverse series of off-road challenges. One of the courses had multiple steep mounds, and at one point, the back wheels of the car were completely in the air. Thanks to its four-wheel drive system, which distributed the right amount of power to each wheel, the Compass safely dealt with this course.

This second-generation Compass is the model’s first full revamp in 10 years and stayed true to its purpose - it was comfortable on-road but also an overachiever when things got rougher.

However, its other elements aren’t quite so on-target.

The interior design, an important element to Korean consumers, was dull and dated. The navigation screen was installed inside the center stack, instead of on top of it, and was rather small and outdated compared to its competitors.

The interior space also wasn’t calculated keenly enough as there was no space to put a smartphone after putting two cups of coffee inside the center console cup holders.

The Jeep is equipped with some basic technology to assist drivers, such as rear parking cameras and blind spot monitoring. But it lacks more advanced features, such as driver attention warnings or a lane departure warning system.

The new Compass comes in two trim levels, the Longitude 2.4 and the Limited 2.4, both of which are powered by gasoline engines.

Equipped with 2.4-liter four-cylinder engine, the new Compass makes 175 horsepower and has a combined fuel efficiency of 9.3 kilometers per liter. Prices start at 39.9 million won ($35,043).