Issa Lopez describes her horror movie with heart: Writer-director is known for comedy but adores the dark side

Issa Lopez describes her horror movie with heart: Writer-director is known for comedy but adores the dark side 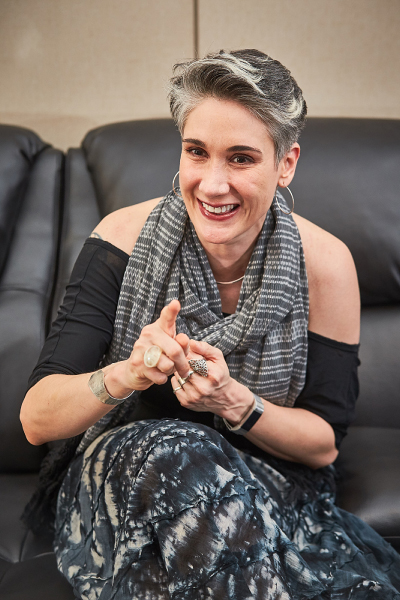 The Mexican writer and director Issa Lopez may be best known for her comedic films and television shows, but her real love is for horror films and fantasy movies based on dark fairytales.

Her comedic talent has been recognized in the entertainment industry and was rewarded with commercial success for “Ladies’ Night” (2003), which she penned, and “Side Effects” (2006), which she directed. But Lopez has always had the desire to work on something darker.

That explains Lopez’s sudden excitement at the mention of director Guillermo del Toro, who was behind the Oscar-winning “The Shape of Water” (2017), during an interview with the Korea JoongAng Daily on Tuesday.

“I just love him,” said Lopez. “How can you not? He lures you in with something beautiful and pokes your eyes out. He’s so sublime and beastly at the same time.”

Inspired by his features “Pan’s Labyrinth” (2006) and “The Devil’s Backbone” (2001), Lopez has finally fulfilled her long-held desire with “Tigers are Not Afraid,” about how Mexico’s drug war has affected children.

After winning the Best Horror Director Award at the Fantastic Fest in Austin, Texas last year, and receiving praise from role models like del Toro, who will be producing Lopez’s next feature, the film has been invited to the 22nd Bucheon International Fantastic Film Festival, which will run through Sunday.

A story revolving around children wasn’t what Lopez had in mind when she decided to write and direct a film dealing with the drug war. At first, she was planning a film on how the first cartel in Mexico was created during World War II. But in doing research, she talked to a sociologist and realized that people paid little attention to how the drug war is affecting children, especially children whose parents are murdered.

“All my life, I wanted to make genre movies,” said the director. “As much as I love comedy, I have always loved genre films like sci-fi and horror. And the film [on orphaned children] was bound to be a dark movie, so it was a perfect way for me to do both.”

Revolving around a group of orphaned children who lost their parents in Mexico’s drug wars, Lopez unfolds a dark fairytale from Estrella’s (Paola Lara) point of view. After the young girl loses her mother, she joins a gang of four orphaned boys whose families have fallen victims to the cartels.

Under the leadership of El Shine (Juan Ramon Lopez), they strive to survive in decayed ruins of crumbling buildings while running away from a cartel that is desperate to get back a stolen iPhone that El Shine has. 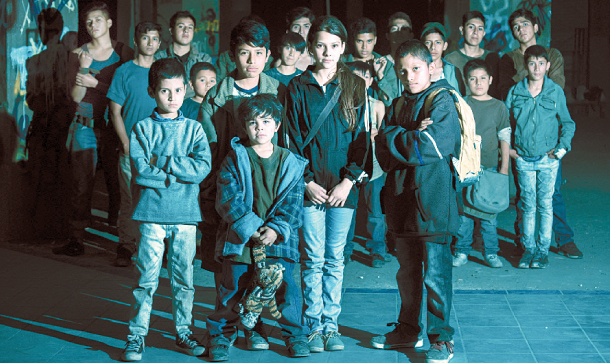 “Tigers are Not Afraid” sheds light on how the drug war in Mexico has affected children, many of whom are orphans. [BIFAN]

The film depicts children as monster hunters while coating their grim reality with fantasy elements like a strange line of blood following Estrella and the voices of the dead haunting her.

“I portrayed the cartels as the monsters they are,” said Lopez.

Activists and journalists covering the drug war in Mexico have been routinely murdered, and when asked whether she feared any threats following the release of the movie, Lopez adamantly said, “No.”

“I wanted to make a point,” she said. “Not about a specific cartel, but about all of them, including the politicians covering up for cartels. In some cases, politicians themselves are cartels.

“But what I’m scared of now is talking about cartels again. I feel they need to stop being stars of the shows,” she said referring to popular series like crime drama “Narcos.”

“There are so many films and dramas about cartels, and people [behind the production] think that’s fine,” she continued. “Even though the protagonist usually deserve what they get at the end, kids don’t care about the consequence of a character’s wrongdoing. Children admire their success, so the only way to approach [cartels] is to make them monsters without a second of being humans.”

In the film, children are eager to be fearless and strong - like tigers - to survive the perils of the drug war. Naturally, they’re forced to grow up fast, but they still seek joy in their childish ways.

That is something that struck Lopez while watching footage showing children that went through the experience of losing their families. She was so surprised to see children describe horrific stories at one moment and then say something absolutely normal in a child’s conversations, like what they had for lunch.

“I wanted to put scenes in the movie that show these children can also laugh and play,” said Lopez. The movie shows how the children try to shoot guns, which is directly followed by scenes where they laugh and play soccer. “That’s how we survive tragedy,” she said.

Exposed to violence from a young age, it’s common to see these orphaned children growing up to join cartels, and hence getting the reputation of potential criminals.

“One of the dangers these children face in reality is that they’re often taken by cartels,” Lopez said. “They become young killers because they’re prime material for the cartels crimes.”

She hopes Mexico’s newly-elected president, Andres Manuel Lopez Obrador, will bring positive change to the future of these children. He is the first left-leaning president in Mexico in nearly 80 years, and will take office on December 1.

“Change allows for growth,” said Lopez. “Mexico has been under corrupt political governments for nearly 80 years. So it’s time to try the left I think. But as long as the United States continues to demand drugs, [the war on drugs] isn’t going to stop. The government in America also needs to change, and hopefully to the left.”

A horror movie with heart, “Tigers are Not Afraid” is a fantasy-imbued ghost story that reflects the abnormal reality many Mexicans have come to accept as normal. Estrella, for example, is barely surprised after seeing a bullet-ridden corpse laid outside her school.

“After the experience with this film, what I’m seeing in my future is genre,” Lopez said. “I want to do stuff with magic - with things that are not necessarily of this world but that would shed light on what’s going on in this world.”

She added, “I will do comedies again, but right now, I want to explore that universe.”