In crash, flaws were apparent

In crash, flaws were apparent 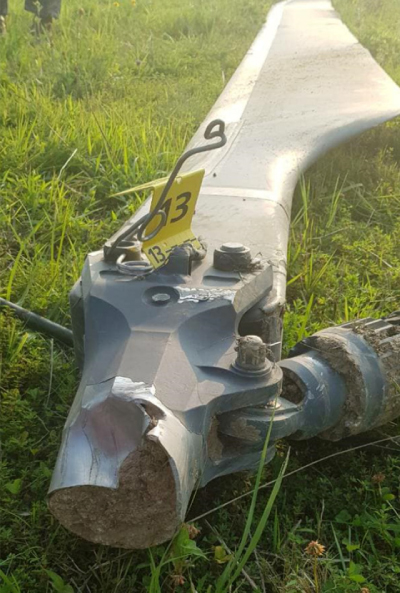 The rotor of the MUH-1 helicopter, which broke off from the body before the chopper crashed on Tuesday at a base in Pohang, North Gyeongsang. [NEWS1]

The rotor of a military helicopter that crashed on Tuesday, resulting in the deaths of five Marines, had broken off seconds after liftoff, surveillance footage showed. The discovery cast doubt about the safety of military equipment produced domestically and could derail Korean defense contractors’ plans to sell choppers abroad.

The helicopter was hovering at an altitude of 30 meters (100 feet) at the Korean Navy’s Sixth Air Wing base in Pohang, North Gyeongsang, on Tuesday afternoon when its rotor separated from the body around four seconds after liftoff, based on surveillance footage released Wednesday evening by the Marine Corps Command.

The de-winged chopper subsequently crashed on the runway while the rotor landed intact around 20 meters away. The shock to the chopper’s fuel tank may have started the fire that killed five of its passengers, including its 45-year-old pilot.

The released footage adds greater weight to suspicions that defects on the MUH-1 amphibious helicopter - nicknamed the Marineon - were the likely cause of the accident, particularly because the pilot had over 3,300 hours of flight experience.

To discover the exact cause of the crash, military authorities launched a joint probe Tuesday evening consisting of 23 officials from the Marine Corps, Navy, Air Force, Defense Agency for Technology and Quality and the Army’s aviation operations command.

The MUH-1 amphibious helicopter is a modified version of the KUH-1 Surion helicopter used by the Army and Navy to suit the needs of the Marine Corps. Both models were built by the Korea Aerospace Industries, based on the design of the Super Puma chopper developed by Europe’s Airbus.

Korea Aerospace Industries was planning to export over 200 Surion choppers to Southeast Asia over the next 15 years, and was in the process of finalizing a deal to sell 11 of them to the Philippines within the year.

Tuesday’s accident reignited controversy over the safety of domestically produced aircraft and could upend the Korean defense industry’s long-term plans to increase production of the choppers. The Marine Corps, which planned to deploy 28 MUH-1 choppers by 2023, have since grounded their three remaining choppers, and the Army announced on Wednesday it would suspend use of all 100 or so Surions currently deployed at divisions across the country.

The Surion, Korea’s first domestically produced utility helicopter, has been the subject of relentless controversy since its development in June 2012. The model’s numerous defects, including vulnerability to surface freezing and propeller issues, led defense analysts to pan it as a “tin can chopper.” A report by the Board of Audit and Inspection this July described the aircraft as “lacking safety for military flights, much less regular use.”

Still, many believe the military inquiry will not address the problems that led to the development of faulty equipment. Some of the families of the accident victims questioned the legitimacy of the military investigators at a news conference outside the Marine Corps First Division base in Pohang on Thursday. They said the investigative committee should not include officials from the Defense Agency for Technology and Quality, which itself should be subject to investigation.

Ha Tae-keung, a lawmaker from the minor opposition Bareunmirae Party, said on Thursday that the National Assembly needed to organize its own investigation composed of neutral parties.

The Blue House was in hot water on Wednesday after its spokesman, Kim Eui-kyeom, denied allegations that the Surion could be defective.

Calling the chopper “among the best in the world in terms of its performance and capacity,” Kim said “the freezing problem pointed out by the Board of Audit and Inspections has been perfectly resolved.”

Military analysts believe the spokesman’s comments were based on fears that the 250 billion won ($219 million) deal to sell the choppers to the Philippines could be in danger.