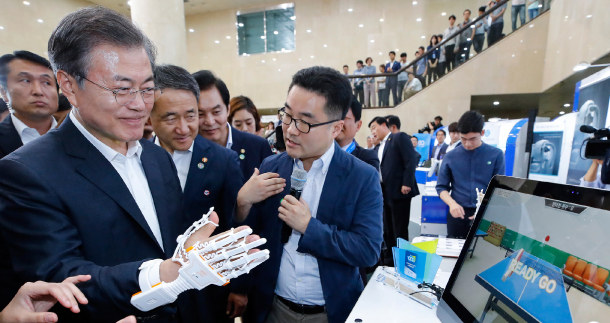 President Moon Jae-in tries on a smart glove during a visit to Seoul National University Bundang Hospital in Gyeonggi on Thursday. The president vowed to remove regulations hampering the introduction of new medical devices in Korea. [YONHAP]

President Moon Jae-in pledged on Thursday to remove regulations hampering the introduction of new medical devices in Korea during a visit to Seoul National University Bundang Hospital in Gyeonggi to promote his deregulation agenda.

Under his deregulation initiative, Moon’s government plans to apply a so-called negative regulatory framework for new medical devices that have been proven as safe to use.

Korea’s regulatory system is currently described as positive. That means if someone invents a new technology, it must comply with regulations that already exist. Otherwise, the creator will just have to wait for the government to devise rules that specifically allow the technology.

By adopting a negative regulatory framework for medical devices, the Moon administration is opening the door to new technologies and allowing regulations to follow later if necessary.

“It would be regrettable if medical devices that have been developed with a lot of effort to help patients recover and doctors treat better cannot be used because of a wall of regulations,” Moon told patients and their family members gathered at the hospital. “If such a situation arises, we cannot help but ask ourselves for whom and for what such regulations are for.”

Moon referred to a medical diagnosis kit as one example of a product that might benefit from deregulation. The time it takes to enter the market would be shaved from one year to less than 80 days under his planned initiative.

“It’s been said that it is harder for a product developer to win a government permit to sell the product than to develop it,” Moon said. Developers often have to see different government officials several times to win approval for the market. This process can be time-consuming, and Moon described the system as “ineffective.”

At the hospital, Moon met with the mother of a child diagnosed with diabetes. The mother, a software engineer, purchased a blood glucose monitoring device from abroad that could check blood sugar levels without extracting blood samples. She used it for her son and developed a smartphone app for it. When she shared it with other diabetes patients, the Ministry of Food and Drug Safety filed a case against her for using the device and sharing the app.

Moon said he would ensure that such cutting-edge medical products would enter the market in a speedy manner through a negative regulatory framework. He admitted that the medical devices industry was one area where deregulation would not be easy because it deals with matters of life and death, but he believes that once such reforms take hold, other industries will follow suit and remove unnecessary regulations.

Moon’s remarks on Thursday are in line with comments he has made in the past about the country’s excessive regulations that hamper development of new technologies.

At a cabinet meeting on May 29, Moon expressed frustration with how the pace of removing such regulations was not keeping up with the fast-changing reality in the workplace.

He expressed the same frustration again on June 27, when he canceled a Blue House meeting to review a deregulation drive carried out by regulators across different industries, citing a lack of palpable achievements.

“Regulatory reform that is not backed by speed will just be rhetoric,” Moon told Prime Minister Lee Nak-yon at the time.

Regulatory reform has been a thorn on the side of Moon’s administration since he took office last May. The president’s popularity fell to its lowest in January because of government indecision on how to regulate cryptocurrencies, at a time when many Koreans were profiting from sky-high prices of bitcoin and other digital currencies. His approval rating in the fourth week of January fell to 60.8 percent.

Moon’s current approval rating is 61.7 percent, according to the latest survey by Realmeter conducted between Monday and Wednesday. It fell by 6.4 percent from last week, the largest decline since Moon took office.

The most likely reason is controversy over next year’s minimum wage, which was decided last week. Owners of small businesses have cried foul over the 10.9 percent increase to 8,350 won ($7.34) an hour, arguing that they won’t be able to afford their workers.

The raise also angered Moon supporters, who said it was not high enough. They were hoping that Moon would keep his campaign promise of raising the figure to 10,000 won by 2020, but that appears impossible with the opposition from businesses.