Pyongyang felt the pinch in 2017

Pyongyang felt the pinch in 2017 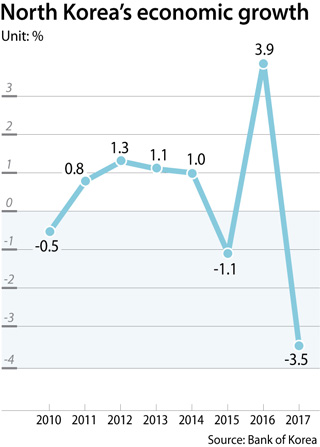 The North Korean economy suffered its biggest drop in two decades last year, hit by tougher economic sanctions in response to nuclear and missile tests carried out between 2016 through 2017.

The downbeat record is a dramatic reversal from the previous year when the country recorded a firm 3.9 percent growth.

The Bank of Korea noted that new economic sanctions from the UN Security Council are the major factor that halted the production of mineral resources including coal and manufacturing goods.

“Multiple UN sanctions took effect from 2016 through 2017,” said Shin Seung-cheol, head of the national accounts coordination team at the Bank of Korea.

“The UN Security Council further strengthened the sanctions in 2017 as it scrapped exemptions on the ban on the export of coal and steel produced from North Korea. The number of banned imports also increased to include textiles,” Shin said.

Of the industrial production, analysts believe that coal is among the hardest hit.

China, a major export source for Pyongyang, also moved to halt all coal imports from the North in 2017. Coal shipped to China constituted a large portion of North Korea’s exports as the resource used to take up 45 percent of the country’s total exports.

Another culprit behind low growth is a drought that ravaged the country last summer. The drought, considered to be the worst in two decades, posed challenges to crop harvesting and feeding many of the 25 million North Koreans.

“The output of thermoelectric power increased, but hydropower production plunged by a large margin,” said the Bank of Korea in a statement.

Output from agriculture and fisheries businesses dropped 1.3 percent in 2017 compared to a year earlier.