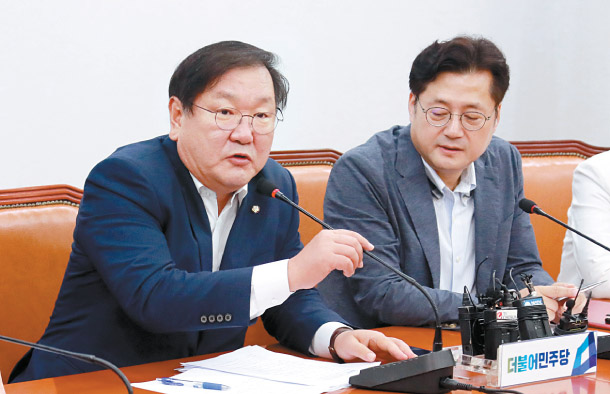 In an effort to help small business owners suffering from the recent minimum wage hike, the ruling Democratic Party is planning to launch its own mobile payment app to combat the toll card payment processing fees taken on by small businesses.

“We are now developing Zero Pay, a mobile payment service app that doesn’t charge small businesses fees for processing card payments,” said Kim Tae-nyun, the policy head of the Democratic Party, during a meeting at the National Assembly on Thursday. “We hope to make the app ready for public use by the end of this year.”

“The Democratic Party will be the lead developer of Zero Pay and unite different mobile payment services proposed by local government bodies,” he added.

According to the government, consumers can use Zero Pay by pre-loading the app with money and scanning the app’s barcode in supporting stores. This will lower processing fees for payments, as Zero Pay allows businesses to sidestep credit card companies.

Under the plan, businesses with annual revenue of less than 300 million won will be able to process payments for free with Zero Pay. Currently, they pay a rate of about 0.8 percent per card transaction. For businesses with annual revenue of between 300 and 500 million won, payment processing fees will drop from 1.3 percent to 0.3 percent if they use Zero Pay, and from 2.5 percent to 0.5 percent for those that take in more than 500 million won.

The government is also reviewing the possibility of making some of the payments consumers make using Zero Pay tax deductible. Critics, however, fear that Zero Pay will end up wasting tax money if it fails to win over users.

Private payment service providers like Naver Pay and KakaoPay, which each have 20 million registered users, have been investing huge sums over the past few years in marketing and development to optimize their apps and partner with retail businesses to attract users.

“There has not been a successful precedent for prepaid services in Korea,” said Sung In-je, one of the heads of the national association of convenience store owners. “It will be difficult for Zero Pay to succeed, as it will be cumbersome for users to keep filling the app up with money.”

Some critics also say that the government’s plan will hurt existing payment businesses and freeload on the expertise they built up over the years.

“I’m skeptical whether we can see the government urging consumers to use a service made with tax money for the benefit of small business owners as fair competition,” said the CEO of one mobile payment service.

“It will be difficult for a government service made with the primary purpose of helping small business owners to succeed,” said Kim Jung-sik, a professor of economics at Yonsei University.