Samsung may launch foldable Galaxy in 2019

Samsung may launch foldable Galaxy in 2019 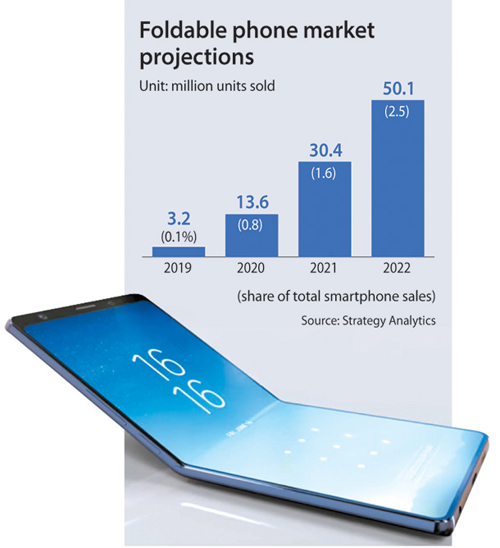 Multiple leaks indicate that Samsung will launch the phone soon.

The Wall Street Journal reported Wednesday that Samsung will introduce the bendable phone “early next year,” while Phone Arena, a media outlet specializing in phone industry leaks, reported that Samsung may unveil its first foldable smartphone at the Consumer Electronics Show 2019 next January in Las Vegas.

According to the Wall Street Journal, the code name for the prototype phone is Winner.

Its display is reported to be seven inches diagonally when opened, which is similar to a small tablet. It will bend towards the inside of the device like a wallet. This would allow users to watch videos on a large screen and also carry the phone around more conveniently by folding it. The phone’s diagonal size is expected to shrink to 4.5 inches when folded.

The U.S. smartphone giant Apple is also working on a foldable phone. It applied for a foldable phone-related patent to the United States Patent and Trademark Office at the end of 2016. Its foldable phone is reportedly 9.7 inches diagonally when unfolded and 5.5 inches when folded.

Samsung’s local rival, LG Electronics, is also joining the competition. It is waiting for the U.S. patent office to approve its patent application for foldable phones by the end of this month. In August last year, it also applied for a design patent for a foldable phone to the World Intellectual Property Organization. Motorola recently received a design patent for a foldable phone from the World Intellectual Property Organization. The design reportedly includes a long rectangular screen that can be folded to function as a smartphone and unfolded to act like a tablet. China’s Huawei Technologies originally planned to unveil its first foldable phone in November, but the company has likely pushed back its launch date to 2019.

The global focus on foldable phones is largely due to consumer expectations for changes to smartphone designs, which have been stagnant for some time.

As today’s premium smartphones now have similar specs, consumers have grown tired of their similar designs and features, and sales growth for many brands has slumped.

The high expectation for the foldable phones, however, is making electronics companies cautious as they prepare to launch them.

“Their biggest struggle is to come up with content and a user interface that is specific to a foldable display,” said a source in the display industry.

The marketability of these products is also another concern. Market tracker Strategy Analytics projects that global foldable phone sales will start at 3.2 million units next year and grow to 50.1 million units by 2022. According to this prediction, even if the foldable phone market expands by roughly 15 times over the course of three years, their sales will only account for 2.5 percent of total smartphone sales in 2022. Industry insiders speculate Samsung’s foldable phone will carry the hefty price tag of $1,500.

The Wall Street Journal noted that the launch date may change and added that Samsung may not put the phone on sale immediately after unveiling it.