From highest court of the land to the smallest

From highest court of the land to the smallest 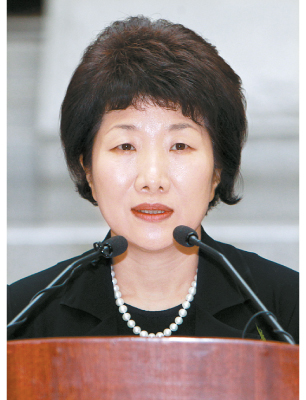 After retiring as Supreme Court justice in January, Park Bo-young has settled into the humdrum life of a law professor. Recently, she applied to be a municipal judge in Yeosu, South Jeolla, handling small claims.

The move is a surprising one. Most judges of her caliber start their own law firms after retirement and use their judicial network to clients’ advantage. Instead, Park is settling for somewhat of a downgrade with the municipal job.

There are about 100 municipal courts across the country that handle trivial cases such as small quarrels or claims where legal fees do not exceed 30 million won ($26,000). The purview of the courts is so small that most have only one judge and share a building with the local registry office.

Working in a municipal court is far from glamorous, and for that reason, no court has had a full-time judge since 2010. Instead, judges rotate between courts.

If Park is appointed as full-time judge in Yeosu, she will be the first in years. Her appointment is awaiting final approval from a judicial personnel committee and the Supreme Court.

The law allows former Supreme Court justices to start their own law firm two years after leaving the bench. This is a common and preferred option for many former judges because not only can they charge higher fees because of their previous experience; they also get to handle big cases that could reach the Supreme Court. This power dynamic has generated fierce criticism of the judiciary.

The Korean Bar Association welcomed Park’s choice and said Yeosu residents would be able to receive high-quality legal services.
“It could be an epoch-making opportunity to turn around Korea’s chronic abuse of power by the retired high-ranking officials,” said Kim Hyun, the association’s president. “It could pressure other former and current judges at the Supreme Court.”

The association recently received a letter from Kim Seon-soo, one of the current nominees for Supreme Court justice, promising that he would not start his own law firm after retiring from the bench.