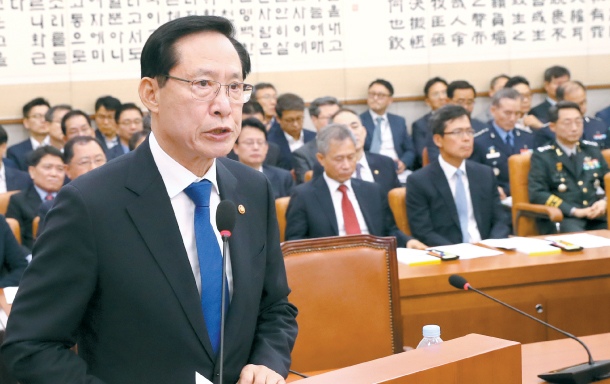 Song Young-moo, the minister of national defense, testifies before the Legislation and Judiciary Committee at the National Assembly on Friday. Lawmakers pressed Song about a martial law plan drafted by the Defense Security Command during the final days of Park Geun-hye’s presidency. [YONHAP]

The military’s contingency plan for martial law included arresting opposition lawmakers for “anti-state” activities in case the Constitutional Court allowed President Park Geun-hye to remain in power during last year’s impeachment unrest, according to a document released by the Blue House on Friday.

The 67-page document, drafted days before the court ruling, offered details on how the military intended to take over the country under the assumption that mobs would overrun the streets if the court ruled against Park’s impeachment.

The military’s intelligence unit had a plan to dissuade lawmakers of Park’s party from voting to revoke martial law. It also sought to arrest opposition lawmakers for organizing protests, a tactic deployed by past military governments.

“The plan stipulated that the martial law command should issue a decree banning rallies and anti-state activities,” Kim Eui-kyeom, the Blue House spokesman, said at a news briefing on Friday, “and a warning that those who violate the decree would be sternly punished.”

The unit, known as the Defense Security Command, also proposed censoring the press by sending military officials to 22 broadcasters, 26 newspapers and eight online outlets to inspect their coverage of martial law, reminiscent of the period under Park Chung Hee and Chun Doo Hwan, who both heavily controlled the press.

Officials would also be dispatched to foreign embassies and bureaus of foreign outlets to explain the reasons for martial law, according to the plan.

In the most visually stark proposal, tanks and armored vehicles would descend on Gwanghwamun Square in central Seoul, where large anti-Park protests had been held regularly for months, as well as Yeouido in western Seoul, home of the National Assembly, and nearly 500 other locations considered of strategic importance. 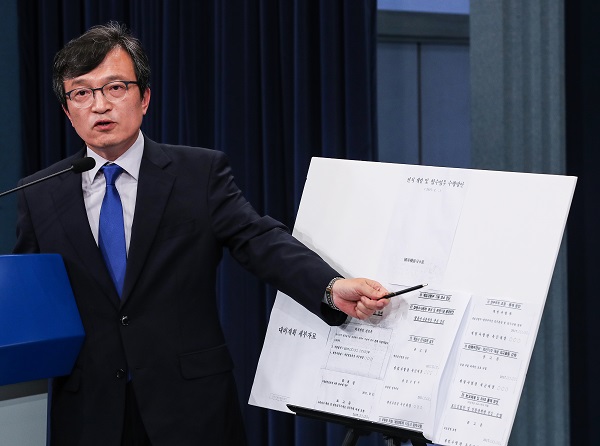 “The document stipulates that, in order to carry out martial law successfully, it is imperative to declare it swiftly and take over crucial locations,” Kim said.

The Defense Security Command had recommended the chief of staff of the Army lead the martial law command, while excluding the Joint Chiefs of Staff from the decision-making process.

The lengthy document also recommended that Park order the head of the National Intelligence Service to follow the martial law command’s directives, bringing the country’s spy agency under the purview of the military.

Furor over the martial law plan started when Rep. Rhee Cheol-hee, a lawmaker from the ruling party, released a nine-page report drafted by the Defense Security Command earlier this month that detailed options for martial law. Democrats accused the previous administration of treason.

President Moon Jae-in on Monday ordered the Ministry of National Defense to submit all relevant documents related to the martial law plan.

The ministry obliged and turned over the papers on Thursday. Kim stated the Moon administration’s position that martial law was meant to target the protesters who called for Park’s impeachment.

The president himself has attributed his victory last year to the massive rallies.

The spokesman said the presidential office decided to make the additional documents public because it was a “duty beholden to the people.”

Attention now turns to how involved the ranking military officials were in the martial law plan and whether Park herself was aware of or approved the plan.