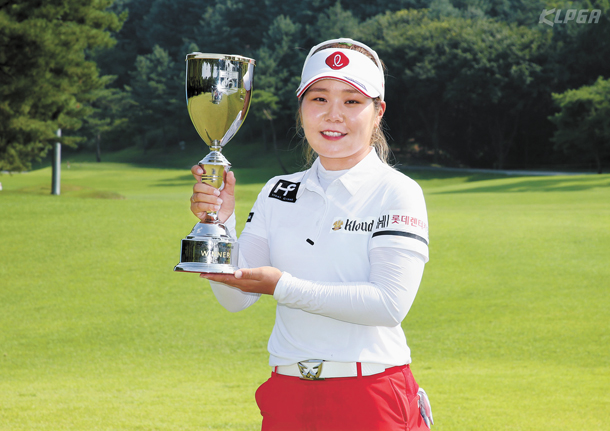 Lee So-young with a trophy after winning the MY Moonyoung Queens Park Championship 2018 at Solmoro Country Club in Gyeonggi on Sunday. [YONHAP]

Lee So-young picked up her third career KLPGA Tour victory at the MY Moonyoung Queens Park Championship 2018 at Solmoro Country Club in Gyeonggi on Sunday.

Lee, who started the final round tied for the lead with Choi Hye-jin, shot a bogey-free round of four under par, 69, to pick up her second win of the season. Though Lee got off to another strong start with back-to-back birdies on the first two holes, she barely maintained a one-shot lead ahead of Choi and Bae Seon-woo until the 11th hole, as she only made pars.

Then, on the par-3 12th hole, Lee extended her lead by two shots for the first time in the final round by making a seven-meter birdie putt from off the green. But Lee’s two-shot lead didn’t last long, as Bae responded with three straight birdies on the next three holes and Choi, too, made back-to-back birdies on the par-5 14th and the par-4 15th.

Lee also made a birdie on the par-4 15th to give her a one-shot lead and by finishing the final three holes with pars, Lee won the tournament one shot ahead of Bae and Choi, with a three-day total score of 18 under par.

“[The weather] was really hot so I tried not to lose focus and it led to a win,” Lee said after the tournament. “In the next two weeks, I’ll take a short break and practice.”

In addition to her second win, Lee had a beyond impressive round during the second day, setting a new course record at 11 under par, 63.

With the victory, Lee takes home the prize money of 120 million won ($107,000) and moves to sixth in the KLPGA Tour’s Player of the Year standing and fifth in money ranking.

“My goal for the season was to win a tournament and I’ve already exceeded my goal,” Lee said. “[Now] I want to win a major tournament.”

After a winless 2017 season, Lee So-young is set for the biggest season of her career, having won the Saint Nine Masters 2018 in April. With another win on Sunday, Lee became the third multi-winner on the KLPGA Tour this season, joining Jang Ha-na and Choi.

Despite a runner-up finish, the KLPGA Tour rookie Choi is now the leader on the Tour’s money ranking, the Player of the Year and the scoring average. Not only that, Choi further extended her lead on the Rookie of the Year standing, at 1,571 points.

Oh Ji-hyun, who was the leader in the Player of the Year standing before the tournament, finished tied for fourth at 13 under par, 203.

Lee Jeong-eun, the defending champion, finished tied for 29th at eight under par, 208.

After a week off, the KLPGA Tour will resume at Jeju Samdasoo Masters at Ora Country Club in Jeju, starting from August 10 to 12.