The Samsung Lions may still be struggling to figure out their starting rotation, but their bullpen has been on fire this season. Now in his seventh year with the Lions, Sim Chang-min has been leading the assault. 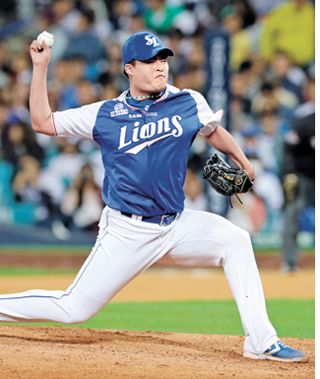 Sim got off to a slow start in 2018 and missed his chance to compete at the 2018 Asian Games. However, since the final roster announcement in June, Sim has been pitching even better and is off to the best season of his career - a 2.28 ERA with five wins, 13 saves and four holds in 42 games as of Saturday. Amongst the closers in the KBO, Sim has the second lowest ERA, after Jung Woo-ram of the Hanwha Eagles.

The Lions team that first drafted Sim in 2011 was a very different beast. The Lions took the Korean Series title that year and went on to dominate the league for the next three years, winning four consecutive titles before they were toppled by the Doosan Bears in 2015.

Sim started as a bullpen pitcher with no chance of becoming a closer anytime soon as Oh Seung-hwan, now of the Toronto Blue Jays, had the position locked up.

Below are edited excerpts from an interview with Sim.

Q. How is your condition?

A. It’s OK. As it’s the summer I’m trying to take good care of myself.

You are a closer and the team is struggling. Do you feel any pressure?

No, I don’t have much pressure because our team has always faced challenges. But it does affect me if we lose a game that we’re supposed to win. [Oh] Seung-hwan didn’t have any blown saves before but when we did lose, I told myself that we can win the next day. Now when we lose a game, I feel like our team gets discouraged. So that does increase the pressure.

Aside from the pressure, are you proud of being a closer?

Yes, because I’m the Lions’ closer.

Over the past three seasons, your ERA against left-handed batters has dropped. What changed?

Compared to last year, you’ve been giving away a lot less home runs. What are you doing differently?

Our home stadium, Daegu Samsung Lions Park, is a lot more favorable to batters. So I try not to give away [big hits]. Since it’s a small stadium, if a batter hits it high it can easily go over the fence. It’s incomparable to the pitchers who play at Jamsil Baseball Stadium. Due to this, I try to be more focused [in games].

You seem to be pitching even better after the Asian Games roster was announced. Do you also think so?

I was pitching well before, too. I haven’t made any changes. It’s just that I have a pattern where I struggle at the beginning of the season and start getting better in June. When I first started my season used to end later because of the Korean Series. Once our season started ending early in 2016 and 2017, I think I’m slowly adjusting to it.

Are you disappointed that you didn’t get added to the final entry for the Asian Games?

I am disappointed but there’s nothing I can do about it.

Is it an important asset that you experienced Samsung’s golden era?

It’s an experience that I can’t buy with money. It’s an asset that I wouldn’t replace with anything else. At the time, I did my work because the veteran players told me what to do. Just watching them play helped me a lot. I learned a lot even by spending time with them. I have pride in that too.

Now you’re at a position where you have to share your experience with the younger players on the team. How do you feel about that?

Since I’m still considered young, I’m not in a position to give advice to others. I sometimes tell [Choi] Chung-yeon that my advice will be meaningful only if they feel like they have to work hard. If not, it doesn’t mean anything. When I was younger I didn’t really understand what the veterans told me. I only started to understand when I started working hard and once I saw results.

Since my statistics aren’t bad, I don’t have much disappointment. But I think I can lower the number of walks and keep the ball count in my favor. I think a good pitcher has the ability to overcome their slump quickly. This also applies to batters. If a batter gets in a long slump, it’s difficult for them to keep their batting average for the season above .300. If a pitcher is in an unfavorable situation, there’s a lot less chance of them overcoming their slump. I’m trying to increase that chance.