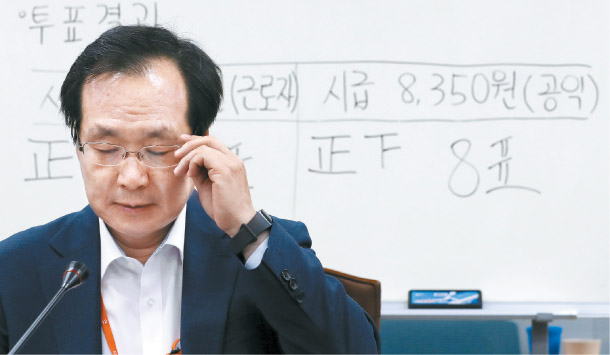 A board behind Ryu Jang-soo, the Minimum Wage Commission chairman, shows the results of the commission’s vote on next year’s minimum wage at the government complex in Sejong on July 14. [YONHAP]

There’s no more contentious issue in Korea these days than the minimum wage.

The government is trying to push up the minimum wage to 10,000 won ($8.89) over the next few years, as President Moon Jae-in pledged to do during his campaign, but decided to slow down its pace due to unexpected side effects. Labor representatives are demanding that the government continue with its swift increases. Employers, however, want the government to freeze the rate where it is, arguing that any more increases could put many of them out of business.

Here’s the basics on this controversial issue, which has unions, employers and various parts of the government all pulling in different directions. 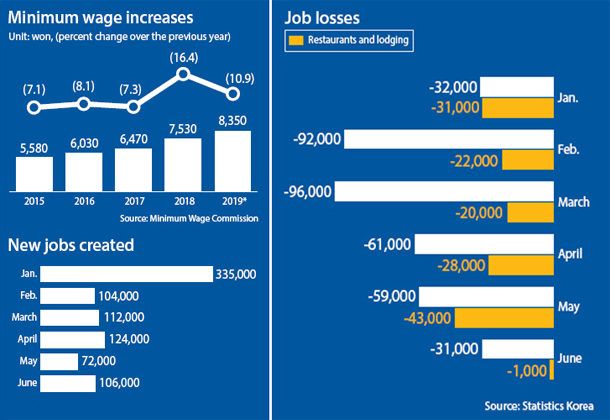 Q. What’s the decision on next year’s minimum wage increase, and how was it reached?

On July 14, the Minimum Wage Commission, a body that has the authority to set the minimum wage each year, decided to increase the rate next year by 10.9 percent to 8,350 won, breaking the 8,000 won barrier. The minimum monthly salary for a person who works 40 hours a week will go up from the current 1.57 million won to 1.74 million won.

The commission, which is composed of representatives from the government, labor and employers, voted on two options during the meeting, which lasted for 19 hours. The government offered 8,350 won and labor groups proposed 8,680 won. The employers, who requested the rate be frozen at the current rate of 7,530 won, boycotted the meeting after their proposal to have different minimum wages be used for different industries was turned down by the other members earlier that week. This was the first time in 27 years that the business representatives sat out the meeting, which they said indicated their desperation over the issue.

Q. Is anyone happy with the 10.9 percent increase?

The decision was not welcomed by either labor or management.

Labor groups are unhappy because the increase was substantially lower than what they had asked for.

Initially, they proposed increasing the minimum wage to 10,760 won next year, a jump of over 40 percent. They toned down their request after a series of meetings and pushed for 8,680 won instead.

The unions argue that the 10.9 percent increase will only effectively increase pay for minimum-wage workers by 2.2 percent. This is because of an amendment made to the minimum wage law in May that will include regular bonuses and welfare benefits as part of employee’s basic pay.

Employers - who requested the rate be fixed at the current level - are also aggravated about the decision because it will inevitably increase their labor costs.

The Korea Federation of Micro Enterprise argued that the average income for the self-employed will fall below 2 million won due to next year’s increase. They said the money that small shop owners will take home will be less than the amount they pay their employees.

Q. Is there any chance that President Moon will realize his campaign promise of raising the minimum wage to 10,000 won an hour by 2020?

Moon admitted that he will not be able to keep his pledge and apologized for this on July 16 during a meeting with aides at the Blue House.

Moon, however, did make clear that he intends to push up the minimum wage to 10,000 won during his term, which ends in 2022, but said that the government will not blindly increase the rate and will take economic conditions into consideration.

Q. Why is the Blue House’s plan falling apart?

Recent numbers show that the increased minimum wage is having a negative effect on the job market.

After the economy created more than 300,000 new jobs in January, that figure fell to nearly 100,000 the following month in February for the first time in nearly two years. The numbers of new jobs created since then has remained around 100,000, with the figure falling to 72,000 in May.

Jobs in the service industry have shrunk, particularly in restaurants and lodging, which are sensitive to a higher minimum wage.

The Moon Jae-in government’s economic policy is based on raising incomes, particularly those of low-income people. Higher incomes, along with the shortened 52-hour workweek, were supposed to encourage consumption, which would increase revenues for companies and thus lead to more hiring. But many owners of small businesses, like restaurant and convenience stores, said the increased minimum wage is making it more difficult for them to earn a living.

It has gotten to a point where, for the first time, business representatives walked out of the Minimum Wage Commission’s negotiations after their request for different minimum wage standards for different industries was rejected.

Q. What are the steps the government is taking to mitigate the impact of this year’s increase?

The government plans to set up a job stability fund that’s either same as this year’s 3 trillion won or slightly higher. The job stability fund provides 130,000 won a month per employee to businesses that have less than 30 employees. In order to be eligible, employees’ monthly wages must be less than 1.9 million won. As of June, 602,636 businesses have received these funds from the government.

The Financial Services Commission plans to lower the credit card commission rate charged to small entrepreneurs in the restaurant and lodging sectors to below 1 percent. These businesses faced commission rates that ranged between 0.8 percent and 2.5 percent, which is higher than the 1-percent rate that credit card companies charge.

The Ministry of SMEs and Startups also plans to introduce an app by the end of this year that would allow consumers to directly transfer money to businesses that bring in less than 300 million won a year in revenue. Consumers would not have to go through credit card companies, which currently charge these businesses commission rates of 0.8 percent.

The Fair Trade Commission also chipped in with a revision on the fair transaction act that allows contractors to raise the prices they charge conglomerates for their products and services when labor costs go up.

Previously, they were only allowed to raise prices when raw material prices increased.

The amendment to the law passed in May that incorporates bonuses and welfare benefits into basic pay will also effectively reduce many minimum-wage workers’ take-home pay.

Q. Is the Moon administration on the same page about the effects of the increase?

Up until the end of May, the Blue House denied any relationship between the minimum wage and the disappointing job reports. Moon called the minimum wage hike a success and said it improved the financial situation of low-income households.

Finance Minister Kim Dong-yeon, though, voiced concern over the increased minimum wage’s negative impact on the economy and said that the pace of increase needed to be slowed.

Kim recently became more outspoken on the issue. He said that, while he agrees that there is a need to distribute wealth in order to stop widening income inequality, the increased minimum wage has started to affect jobs, and a double-digit increase could further affect the economy.