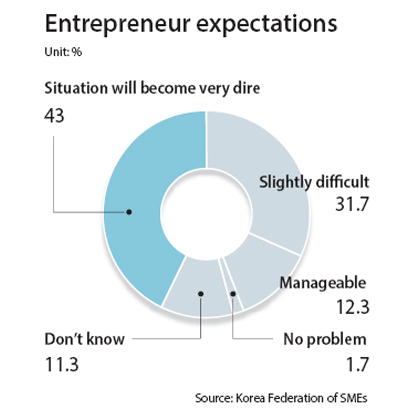 Three out of every four self-employed small business owners anticipate a struggle if next year’s minimum wage is raised 10.9 percent.

According to a survey by the Korea Federation of SMEs on 300 store owners released Sunday, 74.7 percent said they won’t be able to handle the burden of an 8,350 won per hour minimum wage.

Only 14 percent said that they think they would be able to manage.

Nearly half of respondents, or 43 percent, said they will face a dire situation if minimum wage hike goes ahead.

The survey showed that 75.3 percent of small business owners are struggling in the first half of this year compared to a year ago, with 44.2 percent saying their revenue has dropped more than 20 percent.

The reasons for the struggle varied, with 61.1 percent blaming falling sales, 57.5 percent saying the minimum wage hike was the cause and 30.1 percent citing growing competition. Multiple answers were allowed.

Employers reported that they had dealt with the worsening situation in a variety of ways. Over half of respondents, or 53.1 percent, said they had reduced the number of employees. Taking other steps like creating new menus or cutting costs was selected by 29.2 percent, while 13.3 percent reported that they have raised prices.

Other efforts to stay on top include changing business, introducing automation and ramping up events to attract consumers such as discounts and promotion.

While the Minimum Wage Commission has voted in favor of raising the minimum wage 10.9 percent to at 8,350 won per hour, businesses, especially microenterprises and convenience store owners, have expressed concerns about rising labor costs.

In fact while typically it has been the labor union that walked out of such negotiations, business representative boycotted the negotiations to decide the minimum wage on July 14.

Such concerns have led to the government to back down on its initial plan of raising the minimum wage to 10,000 won per hour by 2020 while proposing several measures that would ease management costs including credit card commission rates.

However, it seems the business sector is still unsatisfied.

On Sunday the Korea Employers Federation (KEF) requested that the government reconsider the 10.9 percent hike.

“The recent minimum wage proposal could not only further increase the burden on small and midsize businesses’ labor costs but it could worsen the struggling job market,” a business advocate said in a statement. “We plan to submit a proposal that protests [the minimum wage] to the Ministry of Employment and Labor on July 23.”

In the proposal the business group advocate plans to outline the hardship that small businesses are facing and how the higher minimum wage would have a negative impact on the already struggling job market.

Either the labor or business side could request that the Employment and Labor Minister review the minimum wage proposed by the Minimum Wage Commission within 10 days. In the last three decades the proposal has never been overturned.

If Labor Minister Kim Young-joo accepts the proposed 8,350 won rate, it will become official in August.

The Korea Federation of Micro Enterprise on Sunday said they will hold a massive protest on Tuesday.