[CAPITAL CONNECTIONS] Finding a piece of Georgia on Mount Namsan

[CAPITAL CONNECTIONS] Finding a piece of Georgia on Mount Namsan 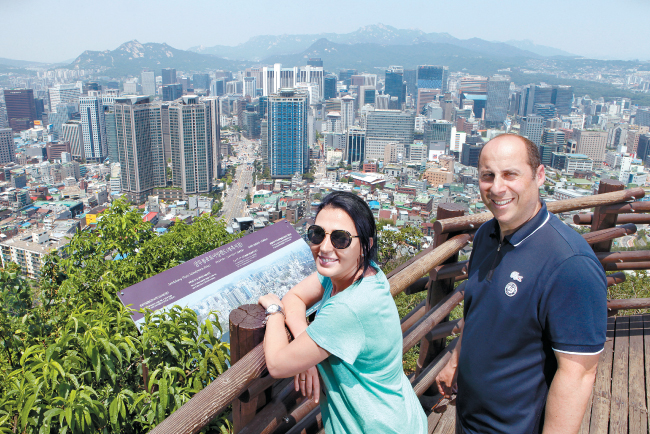 Georgian Ambassador to Korea Otar Berdzenishvili and his wife Maia Gogoladze at Namsan Park in central Seoul on June 1. The ambassador said he goes to the park almost daily with his family and their bulldog. [PARK SANG-MOON]

If you’re looking for an escape from the humidity, there is one location in the Caucasus region that may offer the option of both cool plunges in lakes and snowy slopes within a day’s travel.

“We have 27,000 rivers that begin and end within the borders of Georgia,” said Otar Berdzenishvili, the Georgian ambassador to Korea. “And, of course, there are the Caucasus Mountains where you can ski all day long. In fact, you can swim and ski within a day in Georgia.”

The ambassador, who has trained for the national ski team in the past, said he can tell anyone with confidence that they will find all the skiing they want in the mountains back in his home country.

“I used to be a professional skier and was in the national team in the early ‘90s,” he said. “So, actually, when I represented my country here and received the athletes representing Georgia at the PyeongChang Winter Olympics, it was quite a dream come true for me as it was once my dream to be part of the Winter Olympics.”

The mountains in Georgia will provide a true nature experience for avid hikers, the top envoy added.

“Into the wild,” he said, “that’s what it will be like. In some mountains, there will be no five star hotels. But the proximity to nature while you camp and hike there — it will be what you need if you’re looking for nature untouched.”

His partiality for mountains had some influence in him choosing Korea as his home.

“We went to visit Namsan Park on the second day of my posting to Seoul,” Berdzenishvili said. “My wife and I were exploring Seoul and we were astonished to see the beauty of the city with its parks and green spaces in midst of busy urban areas. It reminded us of our capital city, Tbilisi, which also has green spaces in the central part of the city, too. We wanted our residence in Seoul to be close to the park, so we chose a place in Hannam-dong, just a 10 minute walk to the park.”

The family finds parks with hiking trails almost every weekend, just as they did back in Tbilisi, hiking by Turtle Lake in the outskirts of the Georgian capital city. The ambassador sat down with the Korea JoongAng Daily for an interview on June 1 at his residence to compare Tbilisi and Seoul and his favorite greeneries in both.

Left: Snowboarders on a slope in the Caucasus Mountains in Georgia. Right: Turtle Lake located in the outskirts of Tbilisi. [MOUNTAIN RESORT DEVELOPMENT COMPANY OF GEORGIA, GEORGIAN EMBASSY IN SEOUL]

Q. Tell us more about Turtle Lake in Tbilisi.

A. It is located on the top of one of the hills. Basically the lake was formed from an inactive volcano, therefore it is surrounded by a natural green zone and creates a sort of microclimate within the city. Like Seoul, Tbilisi is also an upland, hilly area, so natural parks and recreational zones on the slopes are a very common site in Tbilisi. The mountain by the lake looks a lot like Mount Namsan in Seoul, especially during spring when everything is blossoming by the trails and pathways in the mountains. It’s simply the perfect place to take a break from city life and enjoy nature. The lake is only about 10 minutes by car from the center of the city. The lake was named Turtle Lake for the many turtles sighted in the area.

When would be the best time to visit Georgia?

I call on Korean tourists to visit Georgia whenever they wish because you can enjoy the Black Sea resorts in the summer and alpine ski resorts in the winter, as well as attend and take part in grape harvests in the autumn or relax in numerous wildlife conservations and reserves in the spring. We have 27,000 rivers that begin and end within the borders of Georgia.

And of course there are the Caucasus Mountains, where you can ski all day long. In fact, you can swim and ski within a day in Georgia. We have so many glaciers, it is wonderful scenery up there on the mountains. I used to be a professional skier and was in the national team in the early ’90s. So, actually, when I represented my country here and received the athletes representing Georgia at the PyeongChang Winter Olympics [in Korea], it was quite a dream come true for me, as it was once my dream to be part of the Winter Olympics. 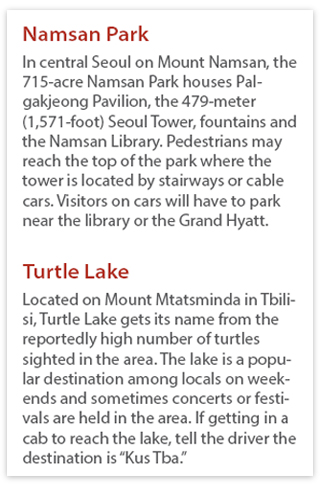 Would the mountains found in Georgia differ a lot from those found in Korea?

Georgians are just as avid hikers as Koreans are. To put it shortly, “into the wild” — that’s what it will be like. In some mountains, there will be no five-star hotels. But the proximity to nature while you camp and hike there, it will be what you need if you’re looking for nature untouched. And hikers will come across thousands of churches in Georgia, architectural gems of the country from the medieval period. Some of them are located atop a cliff with a stunning view.

Georgia also began actively promoting healthy lifestyles. People of my age and the younger generation in my country are also increasingly interested in hiking and biking. In the recreational zones of Tbilisi, you will also find hundreds of people with backpacks and walking sticks wandering and ascending steep mountains.

As for differences, I have to mention that, upon arriving in Korea, I was quite surprised as I watched older people exercising and maintaining their good shape. Unfortunately, at the moment, you rarely meet a person older than 70 running, walking or doing push-ups on parallel bars in Georgia.

This year marks the 100th anniversary of Georgian Independence. How is the embassy celebrating the anniversary in Seoul?

This year, Georgia celebrates its 100th year since the foundation of the Democratic Republic of Georgia, so in cooperation with the Seoul Mayor’s Office, we lightened city hall in the colors of the Georgian Flag on May 26. We also organized the first chartered direct flights between Georgia and Korea.

Additionally, we are working intensively with the Hankuk University of Foreign Studies to open up a Georgian language course there. We will also be hosting a Georgian movie week and a visit by a Georgian dancing company, Ensemble Rustavi, whose polyphonic singing was awarded the Unesco Pacha Prize [a prize for oral or intangible heritage masterpieces] in 2001.

Any updates on the latest bilateral relations?

Georgia is getting more popular in Korea. Our embassy does an outstanding job in promoting our culture, history and nature. However, Korean people do not yet know about our rich sports history. For instance, both our countries can boast gifted generations of judo wrestlers. Historically, Georgians have been fine wrestlers and they have been presented in different world championships. For more than a decade, Korea has been inviting Georgian Judo wrestlers on Jeju Island, where they pass preparations for further tournaments. I think this is very good beginning for the further boosting of bilateral cooperation in sports.

The number of tourists has also been on a drastic incline. Back in 2012, we had [only] 100 tourists from Korea in Georgia. Since 2012, we have had more than 7,000. I think in the near future we can double this number. As part of a project to boost tourism between the two countries, we are looking for an opportunity to film a Korean drama in Georgia as well. To all pending tourists, I say come over: they will be able to enjoy Georgian wine whose history goes back some thousands of years and dinner tables laden with more than 100 dishes at a time! It will be a feast of a lifetime. 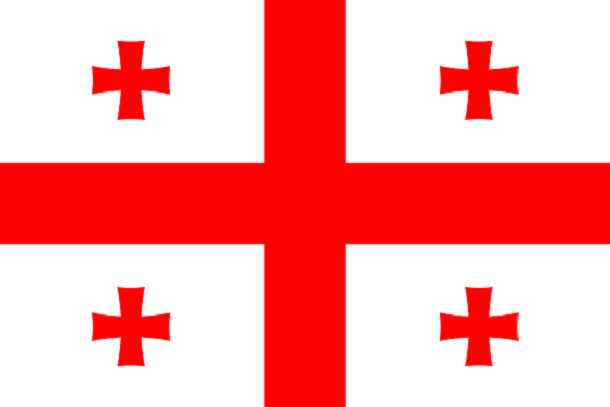 • Capital: Tbilisi
• Largest city: Tbilisi (pop. 1.3 million)
• Area: 26,911 square miles (about 70 percent the size of South Korea)
• Population: 3.72 million
• Main language: Georgian
• Korean expats: 105 in 2018
• National Day: Independence Day on May 26
• Fun fact: Over births, deaths, weddings or for any ordinary family dinner, Georgians like to hold a supra, a lengthened dinner time with dozens of Georgian dishes of meat skewers, cheese and fermented vegetables and be joined by a tamada, or toastmaster, who can give toasts for hours, telling stories of myths, religions, history, current affairs and the arts.

Georgia and Korea established diplomatic relations in 1992. Since the establishment of the Georgian Embassy in Seoul in 2012, the two countries have exchanged high-level visits to discuss trade ties and cooperation on agriculture, education, health and energy. South Korea exports automobiles, steel and machinery to and imports copper from Georgia.


Country of wineries and polyphonic singing

The possible earliest evidence of wine made from the Eurasian grape was found on pottery shards in archaeological sites in Georgia last year. Experts said, at the time, there may be evidence dating back to 6,000 B.C. that Georgians produced wine. Georgia’s polyphonic singing also won global acclaim when it was inscribed as an intangible cultural heritage of humanity by Unesco.

Ambassador Otar Berdzenishvili arrived in Seoul in April 2017. Previously, he was the ambassador to Brazil and deputy minister of defense in Georgia. His diplomatic postings include the United States, Canada and Mexico. Born in Tbilisi, the top envoy is married with two daughters and studied at Johns Hopkins School of Advanced International Studies.