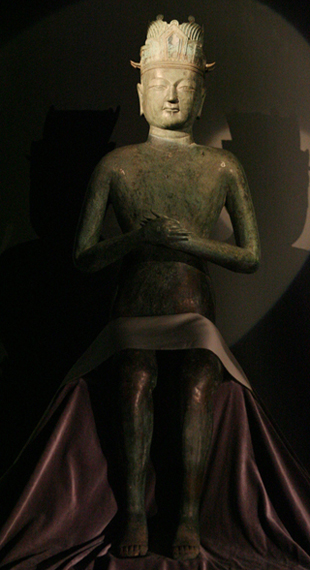 North Korea’s bronze statue of Wang Geon, the founder of Goryeo Dynasty, may be crossing the border once again to be exhibited at the upcoming “Goryeo: The Glory of Korea” exhibition set to begin on Dec. 4 at the National Museum of Korea in central Seoul. [YONHAP]

Back on July 25, 918, a general named Wang Geon revolted against Gung Ye, the founder of Goguryeo, as he was going increasingly despotic, and established the Goryeo Dynasty. Goryeo annexed Silla in 935 and defeated Baekje the following year, uniting the Later Three Kingdoms and ruling most of the Korean Peninsula until the establishment of Joseon in 1392. Goryeo is known for great accomplishments such as establishing relations with the southern kingdoms of China to stabilize national sovereignty, as well as enacting a law that prohibited the country from collecting more than one tenth of a person’s income as tax. But above all, the dynasty flourished in the arts, creating many sophisticated works as a Buddhist state.

“As the successor to Unified Silla and Balhae, Goryeo integrated the diverse cultures of its predecessors to develop an open and cosmopolitan society enjoying active exchanges with neighboring countries,” said an official from the National Museum of Korea. “Somehow, the era has been overshadowed by other dynasties even at the museum. Therefore, we want to take this opportunity to really introduce the beauty of Goryeo art through refined celadon pieces and Buddhist paintings.”

To celebrate the 1,110th anniversary, the National Museum of Korea and regional national museums across the country are presenting a series of special exhibitions. Because Korea was under Japanese colonization for the dynasty’s 1,000th anniversary in 1918, museum organizers said they will make sure this year’s celebration is a grand one. 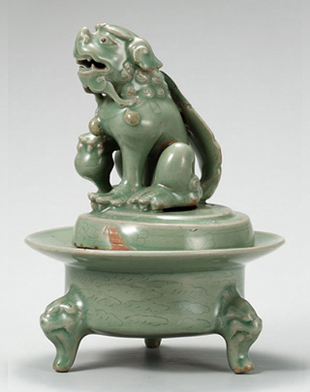 Celadon Incense Burner with Lion-shaped Lid, which is National Treasure No. 60, is one of many great Goryeo celadons. [CULTURAL HERITAGE ADMINISTRATION]

On July 20, a special exhibition kicked off at the National Museum of Korea’s Children’s Museum in central Seoul for children to learn about the dynasty. Titled “Crafted and Printed in Goryeo: Secrets of Inlaid Celadon and Metal Type,” the exhibition will introduce important cultural artifacts from Goryeo including the pale green-glazed ceramics the dynasty is known for, as well as the famous Goryeo Daejanggyeong, or Tripitaka Koreana. This exhibition runs until Dec. 31.

The largest exhibition of the series is the “Goryeo: The Glory of Korea,” scheduled to open on Dec. 4 at the National Museum of Korea. This is where the visitors will see the real Tripitaka Koreana, which is currently at the Haein Temple on Mount Gaya in South Gyeongsang. Designated a Unesco World Heritage item, Tripitaka Koreana is known as the most complete collection of Buddhist texts, laws and treaties extant, engraved on approximately 80,000 woodblocks between 1237 and 1248. It was the Goryeo artisans who invented movable metal type in the first half of the 13th century, well before Johannes Gutenberg created his press. The National Museum said it is currently discussing the volume and the method of transporting the woodblocks with the temple.

“We’ve discussed with many institutions to have all the great artworks and artifacts of Goryeo in one place at the exhibition,” said Bae Ki-dong, director general of the National Museum. According to Bae, about 90 Goryeo artifacts have been confirmed to be coming to Korea for the exhibition from abroad, including the Goryeo-era painting Amitabha Buddha which is a part of the National Museum of Oriental Art’s collection in Italy. This will be the first time that the painting will be exhibited in Korea. Another artifact that the National Museum is eager to show is metal print book known as Jikji Simche Yojeol, also known as the “Anthology Teachings of Zen Buddhist Priests.” It is currently part of the collection of the National Library of France, and the museum said it is under negotiation to successfully bring it to Seoul for the exhibit. Other artifacts that will be displayed at the December exhibition include some 20 national treasures including the Celadon Incense Burner with Lion-shaped Lid, which is National Treasure No. 60. 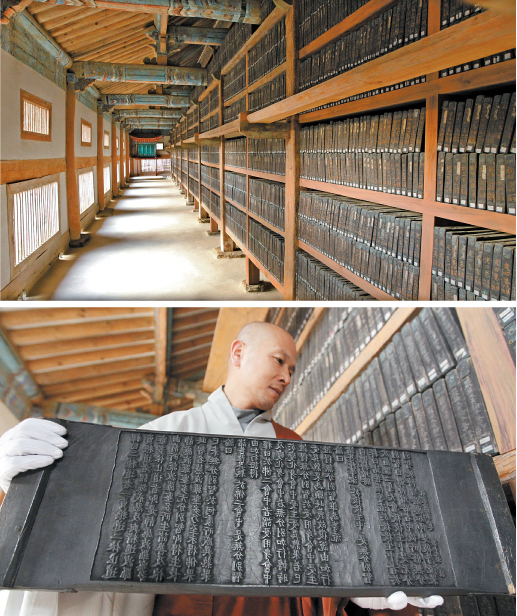 Goryeo Daejanggyeong, or Tripitaka Koreana, engraved on approximately 80,000 woodblocks that are stored at Haein Temple in South Gyeongsang, may travel to Seoul for the upcoming Goryeo exhibition at the National Museum of Korea which will begin Dec. 4. [YONHAP]

Since Goryeo’s capital was North Korea’s Kaesong for many years, many of Goryeo’s artifacts are currently located in North Korea. The National Museum of Korea said it is negotiating with North Korea to bring some important Goryeo artifacts down for the upcoming exhibition, such as the bronze statue of Wang Geon, which was excavated in 1992 from the king’s tomb in Kaesong. The statue has already crossed the border once in 2006 when the National Museum of Korea organized the “Cultural Heritage from North Korea: National Treasures from Pyongyang,” a joint exhibition with Pyongyang’s Central History Museum.

“We’ve sent a letter to Pyongyang through the Unification Ministry requesting for some 50 artifacts for the exhibition,” said Bae. “The list includes the statue of Wang Geon as well as the Metal Type.”

Other regional museums including museums in Gongju in South Chungcheong, Cheongju in North Chungcheong, Chuncheon in Gangwon and Daegu also have organized special exhibitions and forums throughout the year. Schedules can be seen on the National Museum of Korea’s website, museum.go.kr.