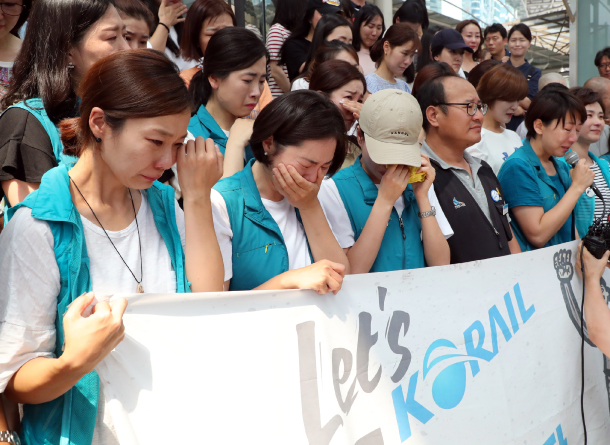 Former attendants of Korail who were fired over a strike 12 years ago cry for joy at a press conference at Seoul Station on Saturday after the company decided to rehire them. [YONHAP]

Some 180 former Korail employees who were fired 12 years ago are to be rehired after an extended legal battle, the company and labor union confirmed Saturday.

“This has been an issue of conflict in society for the past 12 years,” Oh Young-sik, president of the Korea Railroad Corporation, or Korail, told the press on Saturday. “The company decided to reach an agreement with the labor union to lift some of the burden on former workers.”

In March 2006, Korail decided to transfer attendants on its Saemaeul trains to KTX Tour & Leisure, a subsidiary. Their work would not change, but they would be employed by the subsidiary, not by Korail.

Employees objected to the transfer and many went on strike. By May of that year, Korail had fired about 280 attendants who refused to accept the move. A group of those former employees filed a suit against the corporation in October 2008 and the Seoul Central District Court ruled in December that year that the workers should be re-instated because they were initially hired under contract by Korail and not the other company.

Korail argued that the attendants had been working on fixed-term contracts, not as full-time employees, so they could be transferred. The company filed an appeal and Seoul High Court upheld the original decision in 2011.

Korail appealed again and the Supreme Court overturned the decision in 2015, saying the workers were on fixed-term contracts and Korail was not bound by contract to keep the workers as full-time employees.

One of the former employees involved in the case committed suicide shortly after the Supreme Court decision was announced.

The former Korail workers have been rallying against the decision for years, most recently camping outside Seoul Station in central Seoul for the last two months after an allegation surfaced that the Supreme Court decision in 2015 may have been influenced by the personal interests of former Chief Justice Yang Sung-tae. The prosecution has been looking into the case.

The 180 workers who will be rehired are those who have continued the legal battle against Korail, according to the company and the Korean Railway Workers’ Union. They are to be rehired as full-time employees for jobs at stations, including office and administrative positions, instead of as attendants on trains, according to the agreement.

“We have finally reached the decision to have the dismissed workers rehired as full-time employees of Korail,” a spokesperson of the Korean Railway Workers’ Union said in a press conference at Seoul Station on Saturday. “But we will continue to fight for the cause until Korail hires attendants directly [instead of having subsidiary companies hire them].”

Korail’s attendants are still normally hired through its subsidiary companies.

“As of now we do not have plans to directly hire train attendants,” a senior Korail employee told the JoongAng Ilbo under the condition of anonymity.

Korail said the former workers will be hired in stages this year and next year.

“It was a decision that had to be, and rightfully was, reached between the union and the company,” Hwang Sung-kyu, director of the Railway Bureau of the Ministry of Land, Infrastructure and Transport, told the JoongAng Ilbo. “I understand that the agreement was reached through a number of negotiations and discussions.”

The company and the union held multiple meetings from July 9 before they reached the agreement on Saturday.

“A female attendant told me she is getting her job back at Korail, what great news!” Park wrote on his Twitter account Saturday alongside a screen capture of a text message he said was sent to him from a former female KTX attendant. “I have been part of these workers’ events and have been supporting their cause.”

The screen capture of the text message read, “Mayor, we have reached an agreement to be rehired. Thank you very much. We hope to pay you a visit soon.”

Park on July 18 last year attended and spoke at an event organized by the Korean Railway Workers’ Union at Seoul Station. “I have always felt bad that I could not be by the side of the dismissed workers as they continued rallying,” Park said at the event. “Korail should directly hire the attendants instead of hiring them through subsidiary companies.”