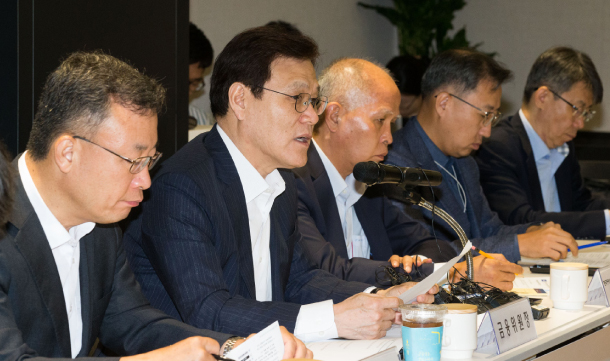 Choi Jong-ku, chairman of the Financial Services Commission, speaks at a meeting of executives and representatives of local fintech companies, including internet-only banks, on Monday at Kakao Bank’s headquarters in Pangyo, Gyeonggi. [YONHAP]

Choi Jong-ku, chairman of the Financial Services Commission (FSC), said on Monday that he believes Korea’s banking act should be revised to allow the fintech industry to grow, adding that the government is in “close talks” with the National Assembly to do so.

Choi was referring to an amendment to the banking act that would allow non-financial companies to hold more than 10 percent of the shares in banks.

Online-only banks K bank and Kakao Bank, which were launched by IT companies KT and Kakao, argue that the regulation must be revised to increase innovation in the financial industry, although opponents say that it would hand over special privileges to a handful of firms.

“Financial firms have become more accepting of information and communication technologies [ICT] recently, and we are seeing more ICT firms becoming players in the financial industry,” Choi said during a meeting with executives from K bank and Kakao Bank as well as representatives of local fintech firms at Kakao Bank’s headquarters in Pangyo, Gyeonggi, on Monday.

“The connection between finance and ICT is becoming more sophisticated.”

Choi credited fintech companies and internet-only banks as the cause of the recent changes to the financial sector, including the move to do away with the old-fashioned public certification system, which was implemented nearly two decades ago and is notoriously inconvenient.

“Internet-only banks are bringing innovation to the financial industry and providing more convenient services to the public, bringing together the finance and non-financial [industries]. This is difficult to regulate under the existing system,” he added. “We need to redesign the regulatory and support system [to further promote this convergence].”

Proposals on revisions to the banking act have been made by a number of lawmakers, but the bills are sitting idle at the moment, awaiting approval by the National Assembly. If passed, the revision would allow ICT firms such as KT and Kakao to raise their stakes in the internet-only banks to as much as 34 to 50 percent, which would make it easier for the banks to re-capitalize if necessary.

The FSC also proposed a bill in March that would allow the commission to be more flexible in its regulatory activities, although Choi expects that it will take some time for the bill to receive the green light from the National Assembly.

This is the second time in less than two weeks that Choi has talked about changing the country’s regulatory framework to give fintech companies more room to grow.

On July 12, Choi also said it was vital to change certain regulations, such as the banking act, in order for Korean laws to meet international standards.