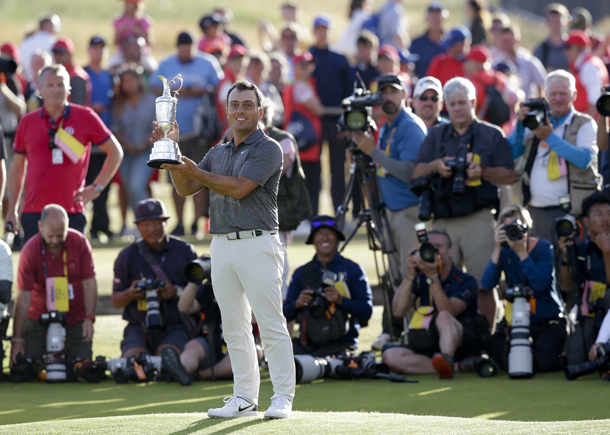 Francesco Molinari of Italy poses with his trophy after winning the British Open at Carnoustie Championship Course in Scotland on Sunday. [AP/YONHAP]

Francesco Molinari didn’t get the loudest cheers at the British Open.

He was overlooked for much of Sunday playing alongside Tiger Woods, who caused pure pandemonium at Carnoustie in Scotland by taking the lead in the final round of a major for the first time in nine years.

Molinari settled for the best cheer of them all.

Amid so much chaos - seven players atop the leaderboard, six of them still tied on the back nine - Molinari played a steady hand by going the entire weekend without a bogey and finishing with a 5-foot birdie putt that secured his place in history as Italy’s first major champion.

“Clearly, in my group, the attention wasn’t really on me, let’s put it that way,” Molinari said, the gleaming claret jug in front of him. “If someone was expecting a charge, they probably weren’t expecting it from me. But it’s been the same the whole of my career.”

His charge was a 2-under 69 in the strongest wind of the week, the only player from the last four groups to break par.

Woods lost the lead with one bad swing that would have been even farther left of the 11th green had it not crashed into the fans, leading to a double bogey. He followed that with a bogey and never caught up. He had to settle for a 71.

Jordan Spieth, tied for the lead in his bid to go back-to-back in the British Open, failed to make a single birdie and shot 76, his highest score Sunday in a major.

Kevin Chappell made two double bogeys, the last one on No. 17 that derailed his hopes. Kevin Kisner made his double bogey early. Rory McIlroy and Justin Rose each made a run with eagles on the par-5 14th hole, McIlroy with a 50-foot putt, Rose with a second shot that bounced off the base of the pin. They ran out of holes.

Xander Schauffele, the last hope to keep alive the American streak of five straight majors, was one shot behind until he sent a long iron to the right of the 17th and failed to make a 15-foot putt for par.

Molinari clinched it with a driver that skirted the edge of a pot bunker, leaving him a lob wedge from 112 yards to 5 feet. He poured it in, raised his right fist and shook it lightly before slamming it for emphasis.

Then, he waited in the trailer to see if anyone could catch him. At one point, he went over to the practice green, but not to prepare for a playoff.

“I probably would have felt sick watching on TV,” he said.

Molinari finished at 8-under 276, the lowest score in eight Opens at Carnoustie, the course where Jean Van de Velde threw away the British Open with a triple bogey on the last hole in 1999, where Padraig Harrington twice hit into Barry Burn on the last hole to make double bogey and still won.

“Just disbelief, to be honest,” the 35-year-old said. “To go the weekend bogey-free, it’s unthinkable. Playing with Tiger was another challenge. But I felt really good this morning. I felt I was ready for the challenge.”

Woods had every reason to believe he would cap a most improbable comeback from four back surgeries.

His red shirt blazing against the yellow grass of a dry Scottish summer, Woods hit driver into the wind on the par-4 fourth to set up birdie. Into the wind on the par-5 sixth, three deep bunkers to the right and out-of-bounds to the left, he got to the front of the green with a driver and a 3-wood for another birdie.

And just like the Woods of old, the players he was chasing started to collapse.

Spieth gambled with a shot to clear the burn on No. 6 and went into a gorse bush, making double bogey. Schauffele chopped up the next hole for double bogey.

Woods had the lead.

And then he lost it with two bad holes. Still in range, he couldn’t get close enough for a birdie when it mattered. It was the first time since the 2007 U.S. Open that he trailed going into the final round of a major, had the lead and didn’t win.

His anger over his mistakes was tempered by perspective, comparing it to Serena Williams losing in the finals at Wimbledon.

“The beginning of the year, if they’d have said, ‘You’re playing The Open Championship,’ I would have said I’d be very lucky to do that. Serena and I are good friends. I’m sure she’ll probably call me and talk to me about it because you’ve got to put things in perspective. ... I know that it’s going to sting for a little bit here, but given where I was to where I’m at now, blessed.”

It might sting even worse for Spieth. One day after a bogey-free round of 65 to share the lead, he had a birdie-free round at the worst time. His best chance was at the 14th, where he three-putted for par from about 40 feet.

The victory adds to Molinari’s best stretch of golf.

Now at a career-best No. 6 in the world, he has won three times and been runner-up twice in his last six tournaments. One of those was three weeks ago at the Quicken Loans National when he shot 62 in the final round and Woods, the tournament host, presented him the trophy.

This round wasn’t flashy, and neither is Molinari. He saved par with 8-foot putts on the 12th and 13th, two of the most pivotal putts all day.

But not the most memorable.

“That putt on the last, I’ll never forget,” he said.