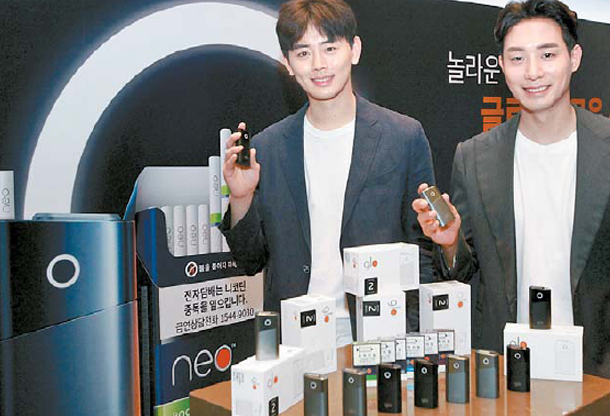 British American Tobacco (BAT) Korea unveiled glo Series 2, a redesigned version of its heat-not-burn device, for the first time in Korea on Monday.

The new series come in black and gray with a glossy surface and a more curved edge aimed to fit more smoothly in the hands. The technology inside hasn’t changed. Domestic sales will start next Monday at glo stores, online and in convenience stores nationwide.

The tobacco-filled sticks that go with the product are also changing. The original Neostik lineup will now be joined by the Neo range. There will be six Neo flavors that boast stronger flavors than their Neostik counterparts - a common consumer complaint.

The Neo range will ultimately replace the Neostiks, although for now they will be sold side-by-side.

The company explained that the updates were based on consumer research in Korea. One of the most common opinions from consumers here was that they wanted a more premium looking product.

“Korea has always been a very important market, based on the size of our operations and investments,” said BAT Korea CEO Matthieu Juery at a press event held Monday in central Seoul. ”One of BAT’s most state-of-the-art factories is in Sacheon [South Gyeongsang] - it not only produces and imports products [to Asia] but also is equipped with latest technologies.”

A company spokesman added that Korea, along with Japan, is one of the countries where heat-not-burn devices have proven very popular. This is why Korea was chosen for the launch of the new glo series.