BMW under pressure as cars keep catching on fire

BMW under pressure as cars keep catching on fire 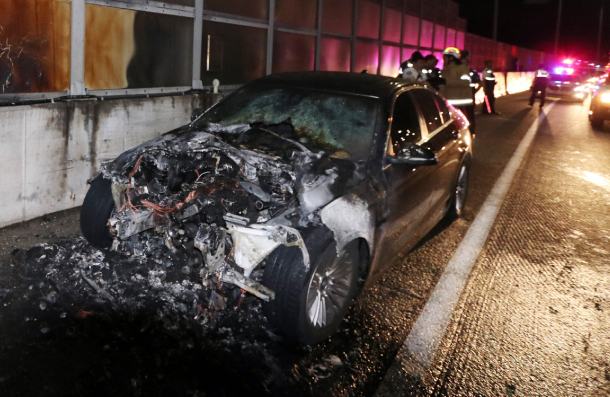 A burnt-out BMW 520d sedan is parked on the side of a highway in Incheon after a fire broke out in the engine while it was being driven on Monday. [YONHAP]

Reports of BMW 520ds catching on fire are on the rise in Korea, posing a serious threat to the carmaker’s credibility.

An official recall of the vehicles has still not been announced, making owners of the country’s second most popular import brand anxious about their own cars.

The latest fire broke out on Monday in Incheon on a highway in Incheon headed toward Ilsan, Gyeonggi. The engine of the 520d sedan reportedly caught fire while the vehicle was moving, resulting in damages worth 37.5 million won ($33,000) according to the local fire station. The driver was not injured.

Monday’s incident was the latest in a slew of fires. A total of 15 fires in BMW 520ds have been reported to Korea’s Ministry of Land, Infrastructure and Transport this year as of Monday, according to the ministry.

In the month of July alone, four fires have been reported; some while driving and some while the car was parked.

“It seems the manifold -part of the emissions system - has defects,” said an official from the Transport Ministry Monday.

“But since all but one of the vehicles were completely burnt out, it will take more time to come up with an exact reason as to why these 520ds caught fire,” the official added.

BMW Korea said it will carry out a recall “soon,” but the range of affected cars and when the recall will take place has not been decided.

The ministry launched its own investigation into the problematic car on July 16 and is waiting for the carmaker to submit a detailed recall plan.

BMW Korea said it needs more time to come up with a plan.

If the recall plan is finalized, it would be the first time that BMW Korea has ever had to carry out a recall due to the risk of fire.

“The fact that we will carry out a voluntary recall has been decided but more time is needed to decide when and what models will be recalled since it is a sensitive matter,” a BMW Korea spokesman said Monday.

“We are considering expanding the recall beyond just the 520d model to ones that use the same parts,” the official added.

This is not the first time a safety issue has been raised with BMW vehicles due to fire hazards.

In 2015, four fires were reported in less than a month in BMW vehicles including the 5-Series and 7-Series, resulting in then-BMW Korea CEO Kim Hyo-joon issuing an official apology. The vehicles were not recalled.

The 520d model is the most popular vehicle within the BMW Korea lineup. In the first half of this year, sales of the 520d accounted for nearly 30 percent of the company’s entire sales.