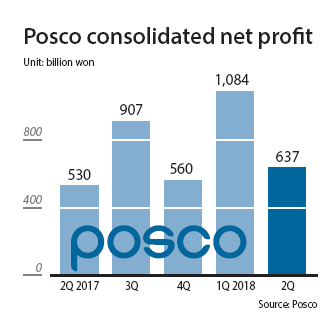 Its overseas affiliates contributed to the profit boost. PT Krakatau Posco, a steel mill in Indonesia, posted a record quarterly operating profit thanks to a steel price hike and sales increase. Its operating profit almost doubled from ＄22 million in the first quarter to ＄50 million in the second quarter while net profit turned around from a ＄16 million loss to a ＄7 million surplus.

Posco alone posted 7.7 trillion won in revenue, up 8 percent from the previous year, and 822.1 billion won in operating profit, a 40.5 percent jump year-on-year.

Despite positive year-on-year growth, the company’s earnings declined compared to the previous quarter. The decline was mainly due to facility maintenance at its Gwangyang plant in South Jeolla, which led to a slight production and sales decline of steel products, said Kim Gwang-soo, head of the steel business strategy office at Posco.

“The sales decline was not that related to the recent trade war,” Kim said, adding that Posco has been preparing for the latest safeguarding measures announced by the European Union.

Kim said the steel sales decline was instead due to the sluggish business of local automakers and construction companies, its main customers.

The company said it will keep investing in its new growth engines like producing key materials used for lithium-ion batteries.