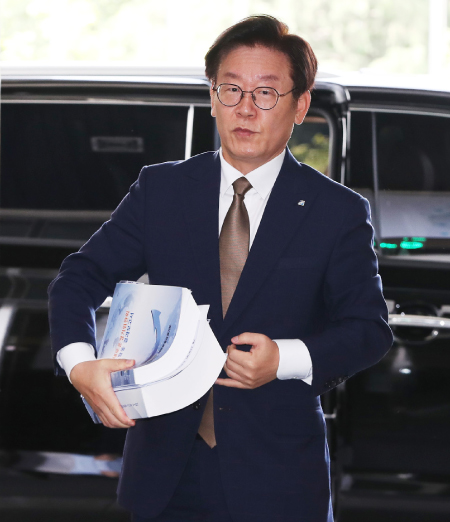 Gyeonggi Gov. Lee Jae-myung arrives at his office in Suwon on Monday. [YONHAP]

Tens of thousands of people called for the resignation of Gyeonggi Gov. Lee Jae-myung after allegations surfaced that the Seongnam government had corrupt ties with a local gang when he was mayor of the city.

“Gyeonggi Gov. Lee Jae-myung and Seongnam Mayor Eun Soo-mi, who have connections with the illegal gangster group Komatrade, must resign now,” is the title of a petition to the Blue House that opened for signing Sunday. More than 78,645 people had signed the petition as of Monday afternoon.

SBS’s investigative TV program “We Want to Know” aired an episode on Saturday that raised questions about ties between the city government of Seongnam and a local gang group called International Mafia.

The program said that Lee Jae-myung, who was a lawyer before he became Seongnam mayor in 2010, once defended two people involved in a case concerning International Mafia, a gang based in Seongnam, in 2007.

A third defendant in that case, a man his 30s surnamed Lee, established a company called Koma in 2012 and another called Komatrade in 2015, both trading companies that import electronic goods like cellphone batteries from China.

Komatrade signed a memorandum of understanding with the Seongnam city government in 2015, when Lee Jae-myung was the mayor. In May 2016, Komatrade paid 8 million won ($7,042) to sponsor an event organized by Seongnam FC, the city’s football club. In October 2016, Komatrade’s President Lee was recognized by the Seongnam city government as a notable small and medium sized enterprise CEO. Every year, the city government recognizes three presidents of small and medium sized enterprises in the city and awards them certain advantages such as local tax audit exemptions.

The SBS program pointed out that under city government regulations, only CEOs of companies that have been in business for longer than three years can win the special recognition. Komatrade got it in 2016, just a year after it was established.

“Lee was awarded as both CEO of Koma and Komatrade,” a spokesperson told the JoongAng Ilbo. “Koma was established in 2012.”

Gyeonggi Gov. Lee refuted the allegations in a lengthy post on his Facebook page on Saturday, before the SBS episode was aired in the evening.

“The SBS show will air tonight,” Lee wrote. “It investigated with a political intention to portray me as a politician with ties to a gang. But mark this, it is very hard for a politician to recognize an illegal gang if it approaches him with a facade as a group of supporters or as a civic organization.”

Lee said he did not recall the two people he defended regarding the mafia case, let alone the one who later became Komatrade president, until the producers of the SBS program contacted him.

“Do you know the Seongnam city government has funding ties with some 400 organizations? And Komatrade is just one of them,” Lee wrote. “Also, Komatrade did not really receive special benefits in local taxes because it was making too small a revenue and already was exempt from tax audit.”

Lee said the episode was influenced by his political rivals who want to “assassinate [his] character.”

Komatrade allegedly paid the salary of a driver for Eun from June 2016 to May 2017, according to the driver’s comments to media outlets last April. Eun at the time denied that she took any bribes from the company and called it a “political scheme.”