On his first day on the job, newly elected South Gyeongsang Gov. Kim Kyoung-soo surprised civil servants accustomed to pomp and circumstance by wearing a backpack to work, accompanied by a single aide.

His chief of staff, Kim Yoon-soo, was in a meeting with civil servants at the provincial government office in Changwon when some in the room began shuffling anxiously after hearing that the new governor would arrive soon.

“Don’t we have to go greet him?” a senior civil servant asked.

“Why? We’re in the middle of a meeting,” the chief of staff replied.

To Kim Yoon-soo, who has known the governor since his days as a lawmaker at the National Assembly, Kim Kyoung-soo’s distaste for ceremony was nothing new. But to the civil servants, who were used to greeting the previous governor at the front door of the provincial office every day, their new boss’s attitude was a shock to the system.

One of Kim’s nicknames is “adult idol,” thanks to his youthful looks. His fame has also reached idol-like levels after he became embroiled in a high-profile political scandal involving an online opinion manipulation campaign led by a well-connected blogger known by the alias Druking.

At a football match in Changwon this month, hundreds of people lined up to take selfies with the new governor. Some attribute his popularity to his experience as a personal assistant to former President Roh Moo-hyun and public relations work for current President Moon Jae-in during his presidential campaign last year.

“The governance of South Gyeongsang can only succeed if the people voluntarily participate and speak to us,” said Kim at a regional event in June.

Kim was confident and poised during an interview with the JoongAng Ilbo at the South Gyeongsang governor’s office in Changwon on July 13. 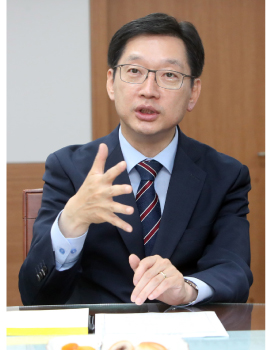 Kim was defiant about the most pressing issue he currently faces - the special counsel investigation into his alleged ties to the jailed blogger Druking and his online opinion manipulation scheme.

“The investigation by the special counsel will demonstrate once and for all that the accusations and attacks raised by the opposition are unfounded,” he said. “In fact, the idea of launching a special probe was first brought up by me.”

According to Kim, he has nothing to hide, since he knew that the probe would be inevitably led by an opposition party member who wants to defame him. Below are edited excerpts from the interview.

Q. Have you been complicit in any illegal activities as part of the Druking scandal?

A. I have already explained this three times after the scandal came to light. Other than some confusion about exactly how many times I met him [Druking], nothing has since emerged from the investigation that goes against what I have been saying so far.

Is it true you may be summoned by the special counsel soon?

That is only if they contact me. As with the prior police investigation, leaking information [regarding things like a possible summons] to the press is just not the right way to go. I am perfectly willing to explain everything necessary at any time, but I believe a formal request should be issued if anything is needed from me.

Why are you saying you will review plans for the new airport in Gimhae, South Gyeongsang?

Since the decision to build a new airport in Gimhae [to meet the air transportation demand of the Busan-South Gyeongsang region] was decided on as a national project, it is impossible to simply overturn. To reassess the project, there has to be an irrefutable reason to do so. To date, there has not been a government-level evaluation of the plan’s flaws. Therefore, I believe a joint taskforce should be created between the regional governments of Busan, Ulsan and South Gyeongsang to perform such a task.

So what is the biggest problem with the project?

The first is the concern that the new airport cannot serve as a gateway to the country’s southeastern region given the way that things are proceeding right now. It is critical that we consider the role and position of the new airport regarding current plans. The second concern is safety. In the first report by ADP Ingenierie - the French company that was contracted to review the siting and feasibility of the new airport - there was no mention of removing mountains. But the preliminary feasibility study by the Korea Development Institute said that three mountains around Gimhae would need to be reduced to make room for the new airport. It can’t be said that safety concerns were fully addressed when plans were drawn up. The third concern is sound pollution. The French subcontractor’s report said only around 897 households would be affected, but according to the Gyeongnam Development Institute, 33,000 to 86,100 people will be affected by sound pollution if the airport is built.

Does this mean you will challenge the project’s current site?

It is not wise to approach the matter with the premise of relocating the new airport. As soon as the siting issue is brought up, unnecessary issues are bound to emerge.

Wouldn’t a regional dispute be inevitable if the siting issue is revisited?

The current government has a very different attitude towards national projects than its predecessor. When the project was decided, the region desperately needed a new airport, and regional disputes arose, as the previous government attempted to take advantage of the siting process. If the current central government makes a swift decision based on expert opinion in line with the three principles I outlined earlier, I believe there will be little cause for disputes between the different regions.

There is a major weir at Changnyeong. What is your position on the Four Rivers Restoration Project?

We have opened our weirs gradually, in case problems may arise in the process, and we eventually hope to completely open all the weirs.

How low does the surface level have to be?

It depends on the weir, but in general I believe we will only see positive effects once the water levels are reduced to half of their current levels. Ultimately we have to fully open these weirs.

How will you like to be remembered as a governor?

South Gyeongsang at one time matched the capital in terms of its political and economic prestige. I would like to be remembered as a governor who gave everything he had to begin an era where South Gyeongsang stands at the helm of Korea’s politics and economy.

Your name is being mentioned more frequently as a potential presidential contender. What do you think about this?

I am already heavily burdened, and I don’t think this possibility is my burden to bear. I do not have the time or luxury at the moment to concern myself with other matters. Wouldn’t successfully rejuvenating South Gyeongsang as its governor be enough of an achievement for one life?