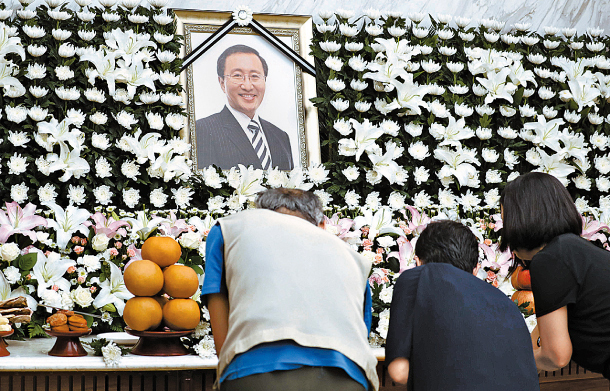 Rep. Roh Hoe-chan, a prominent three-term lawmaker and floor leader of the minor left-leaning Justice Party, leaped to his death Monday morning at an apartment complex in Jung District, central Seoul, days after coming under scrutiny in Korea’s own “fake news” scandal, an online opinion-rigging case linked with the Blue House.

A security guard at the apartment complex found Roh lying unconscious near the entrance of the building that his mother and younger brother’s family was living in at around 9:38 a.m., said police. The 61-year-old lawmaker was dead by the time officers arrived at the scene. At least one suicide note was found on a staircase between the 17th and 18th floor, along with his wallet and business card.

Police suspect Roh leaped to his death. An autopsy won’t be performed because there were no signs of homicide, an officer from the Jung Police Precinct said, adding that Roh’s surviving family confirmed they did not wish one.

A special counsel investigation into the online opinion-rigging case linked with the Blue House and South Gyeongsang Gov. Kim Kyoung-soo accused Roh last week of illegally receiving political funds worth 50 million won ($44,300) from a close associate of Kim Dong-won, the blogger and political operative at the center of the scandal.

According to the independent counsel, Roh allegedly received the money from a lawmaker surnamed Doh, who was arrested last Tuesday on suspicions of bribery and evidence tampering. The counsel requested a pre-trial detention warrant for Doh, but a local court turned it down on Thursday, citing “room for contention.”

Doh is believed to have given the cash on two occasions in 2016. The money is suspected to have come from donations by members of an online group led by Kim, who also goes by the alias Druking. Doh allegedly fabricated evidence to make it look like the money given to the lawmaker had been returned to a bank account that belonged to the online group.

Doh and Roh were classmates in high school.

Roh denied receiving the money last Wednesday while speaking to local reporters, adding he would “faithfully and confidently” respond to the counsel if it summons him, in order to “reveal the truth.”

A spokesman for the Justice Party said Monday Roh left behind three suicide notes in total - one each for his wife, his mother and the Justice Party. The notes to his family will be kept secret, said the spokesman, because they wished not to reveal them to the press.

In the note to the Justice Party, the spokesman said Roh wrote he received 40 million won on two occasions in March 2016 from Kim’s political group, but that he didn’t promise anything in return and that it was only later that he realized he had not followed the proper legal procedures to rightfully claim the fund.

“Who am I to blame?” wrote Roh. “It was a really foolish choice and a shameful decision. I must take responsibility.” The lawmaker lamented causing damage to the party’s future, adding he hoped the Justice Party would “confidently move forward” despite his death.

Roh also apologized to the general public, asking that they blame him but not his party.

The independent counsel was planning to summon Roh next week, a spokesperson from the team said Monday on the condition of anonymity. Investigators were said to have recently found that Roh allegedly received an additional 20 million won from Kim in 2013 as payment for giving a lecture to his online group members.

After summoning the lawmaker for questioning, said the spokesperson, they were planning to decide whether to indict him on violating the country’s Political Fund Act. The probe team hadn’t contacted Roh before his suicide, according to the source.

With the suspect now dead, investigators will likely focus their attention on South Gyeongsang Gov. Kim. The spokesperson said Roh wasn’t the “main stream” of the probe, but refused to specify who that was.

On Monday morning, a 49-year-old man who worked as Gov. Kim’s assistant while he was serving as a lawmaker was summoned for a second round of questioning.

President Moon Jae-in expressed remorse Monday afternoon during a meeting with close aides at the Blue House, saying Roh had worked to make Korea a more progressive society and made “big contributions” to widening the spectrum of Korean politics.

JTBC, a local cable broadcaster and affiliate of the Korea JoongAng Daily, announced Monday it was tentatively halting production of its pre-recorded talk show “Ssulzun,” on which Roh regularly appeared as a panel member. Roh was supposed to participate in the filming Monday, which segment would’ve aired Thursday.

In a statement, JTBC said it was in “shock after hearing the sad news,” continuing that any further notice of the program’s schedule will be revealed “as [soon as] they are sorted out.”

A regular floor leaders’ meeting at the National Assembly was also called off Monday.

Rep. Yoon Young-seok, a spokesman for the main opposition Liberty Korea Party, said in a written statement that it was a “tragedy” for Korean politics that Roh died. Yoon said that Roh was a symbol of progressive politics and that he was an exemplar of a politician serving the working and ordinary people.

Rep. Back Hye-ryun, a spokeswoman for the ruling Democratic Party, said her party could not describe in words how sad and shocked it was about Roh’s death.