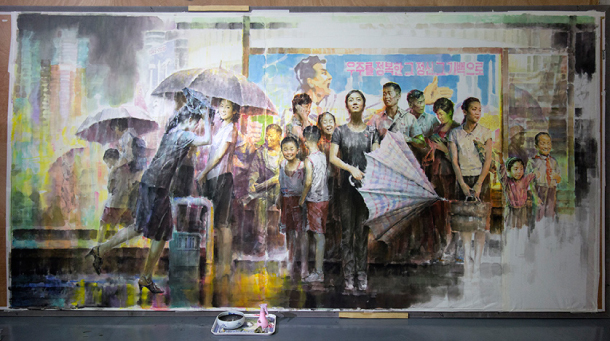 An image of “Rain Shower” by North Korean painter Kim In-sok provided by the organizers of the Gwangju Biennale. [YONHAP]

The Gwangju Biennale, Asia’s biggest art exhibition, has been given government approval for its plans to bring in dozens of North Korean artworks for its upcoming event set for September, its organizers said Tuesday.

The Ministry of Unification has recently given permission for the organizers to bring 22 North Korean paintings into South Korea to be displayed during this year’s Gwangju Biennale in the southern city of Gwangju, South Jeolla.

Korean-American painter BG Muhn is planning a curation of North Korean paintings, or Chosonhwa, during the “Imagined Borders” art exhibition, which will delve into the notion of belonging, national borders, personal identity and community.

Upon approval, the organizers will begin shipment of the artworks late this month to frame and display them at Gwangju’s Asia Culture Center by mid-August.

The North Korean segment of the exhibition will feature North Korea’s top-notch painters like Choe Chang-ho and Kim In-sok, as well as the country’s state-run Mansudae Art Studio.

The collection will include six large paintings collectively drawn by artist groups.

“These are works by Mansudae Art Studio, which have been selected from places like Mansudae Art Studio’s Beijing art museum,” a Gwangju Biennale official said, referring to the North Korean art academy’s museum in the Chinese capital.

BG Muhn, a co-curator for the upcoming 12th run of the Gwangju Biennale, had been attempting to assemble the North Korean collection since last year without progress due to turbulent inter-Korean relations.

In light of recent positive developments between the countries, the organizers finally filed for the unification ministry’s approval in June, which is necessary for South Korean entities to contact or deal with any North Korean people or materials.

Biennale officials said they are also planning to invite three North Korean artists to the exhibition.