Imagining a technological future of his own : Experimental photographer Hwang Gyu-tae is being honored at this year’s Donggang International Photo Festival

Imagining a technological future of his own : Experimental photographer Hwang Gyu-tae is being honored at this year’s Donggang International Photo Festival 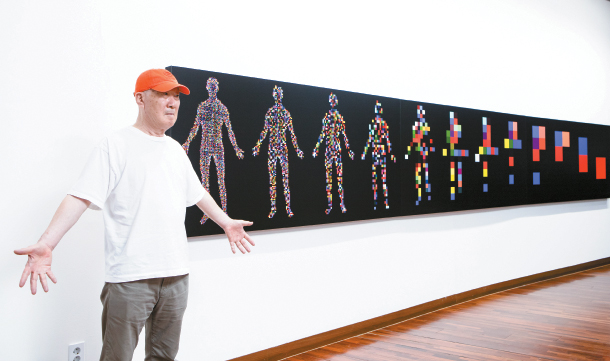 YEONGWOL, Gangwon - Known for its picturesque natural landscapes, this eastern town will get a little more futuristic this summer thanks to the work of a photographer challenging modern technology.

The city is once again hosting the annual Donggang International Photo Festival, which honors one photographer each year, alongside photo exhibitions and workshops. Ever since the city announced that it would make itself known as a photo village in 2001, the festival has contributed to making the city internationally known for supporting photography. For the 17th edition of the event, 3,370 works from 55 countries were submitted.

The town is also home to the country’s first public photo museum, the Dong Gang Museum of Photography, which opened in July 2005. Currently, the museum is playing host to a number of exhibitions focusing on the subject of love.

One exhibit, “The Age of Love,” was put together to show how people connect in different ways than before and features artists from 10 different countries. Another, titled “When You Express Love,” displays works from 20 artists who captured scenes of people expressing love.

This year, the festival chose Hwang Gyu-tae as the winner of the Donggang Photo Award. The 81-year-old photographer is the oldest winner in the award’s history. Hwang, who started his career in photography at the Kyunghyang Sinmun in 1963, moved to the United States in the late 1960s. Since then, he has made many experimental works by using double exposure, burning his film and making collages and montages.

The theme for the ongoing exhibition by the award-winning photographer in Yeongwol is “Apocalypse, the afterwards.”

One word to describe the 60-year career of Hwang is experimental, and in his own words, he “plays some tricks.” Back when people treated the film in their camera like something sacred, he provocatively burned the film he used, and sometimes put photos and paintings together even before the widespread use of photo-editing tools like Photoshop.

“I wanted to research the world of fantasy which was only possible through paintings,” said Hwang, in an interview with JoongAng Sunday, an affiliate of the Korea JoongAng Daily. “There is no way to present the world I want to show with just one photo.”

Hwang creates a fantasy land through his work where he is critical about the future. These ideas are reflected in the photos being shown at the festival. The exhibition’s artistic director Shin Sue-jin said that the works touch upon ideas that focus on the dark side of scientific advancement and cultural development such as cloning technology, waste and nuclear war. Hwang said Shin checked all of his photographs, even the ones that were in the trash on his computer to find works suitable for the exhibition.

The first piece that welcomes visitors at the exhibition shows an owl driving a red sports car. The owl looks somewhat angry or anxious in the photo.

Hwang started using computers to make his works early on. He first bought a computer around 1997, when the hard disk could only hold 80 gigabytes. While playing around with photos on his computer, he became fascinated with the pixels that emerged when he started to enlarge photos. This was the beginning of his “pixel” projects. About half of the exhibition area at the festival is filled with pixel project works, and the largest one on display is “Pixel: Big Brother.” It shows the eye that watches every move in George Orwell’s novel “1984.”

“Evolution-Pixel,” the last piece set up at the end of the exhibition shows a human, in many different colors, eventually becoming a square-shaped dot. Director Shin said that cells inside the human body are no different from pixels that make up the image if we consider that both the cell and the pixel are needed to make things exist.

“When you continue to take ideas, develop new findings and connect them, [new] meanings arise,” said Shin. “The continuous critical thinking against what humans have created contributes in developing Hwang’s art world.”

“As the way of creating new things change as generations change, and when the technology further develops, the way people think changes. As we enter the digital era more so than ever, I’m curious how Hwang’s art perspective will change.”

The following are edited excerpts from an interview with Hwang. 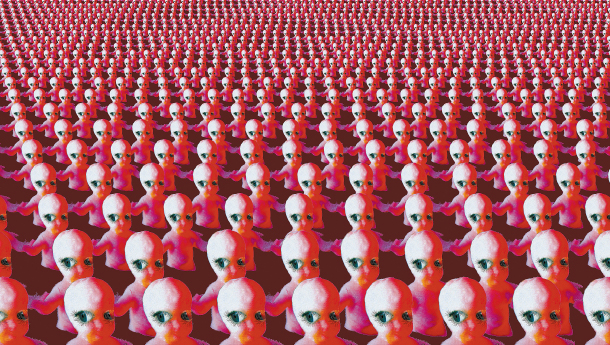 Hwnag Gyu-tae’s “Reproduction,” which the photographer describes as a world where cloned creatures are waiting to be released from a factory. [DONGGANG INTERNATIONAL PHOTO FESTIVAL]

Q. In your work “Pixel: Big Brother,” the eyes seem very destructive. What are they trying to tell people?

A. It is a satire of a society where people’s every move is watched by the eyes of machines. Now there are “eyes” everywhere. Each pixel is a metaphor for the CCTV cameras and the blue shows coldness. How many times are modern-day people photographed from the moment they wake up in the morning until they fall asleep at night? The idea was to have visitors make immediate eye contact with the work as soon as they enter the venue, but the distance from the entrance to the wall is a little farther than I wished. I should have printed bigger eyes.

Are there skulls in “Pixel: Bioplast Map?”

They are from pictures of piles of skulls. I chose one, enlarged it, took a photo of it and then did the same thing over and over again. I think this is one of the maps or a type of topography. The video breaks when the size of the file is small, and when it breaks to its extremes, the pixels can be seen. Then, I made the aftermath look more prominent. You can’t imagine what kind of beauty you will get.

How did you come up with the idea of breaking down pixels?

About 100 years ago, Russian artist Kazimir Malevich made abstract paintings into simple forms like circles, rectangles and crosses. The pixel work isn’t something I created. I just take what’s already been created inside the machines. My work is to discover things that exist inside and bring them outside.

Is there any reason why you used the photo of a human being that has a head shaped like a sheep’s for the exhibition’s placard?

Now, humans are gods and from some perspective, they have transcended gods as we enter a world [in which] people can create creatures by arranging DNA. The new [things] humans create shows that humans are becoming more like animals, who look naughty and sexy from the outside. The society of “Mixism” where humans and animals freely unite may soon be a possibility.

Are you anxious about the future?

I’m not anxious. I just express that anxiety. In my work “Babel,” I composed piles of burnt waste, collected from the sides of the Han River, and combined them with other landscapes. This shows how endlessly greedy human beings can get as well as being a warning against pollution.

How would you introduce your work “Melting the Sun?”

The film contains a picture of the sun, but then I burnt it with a candle. I didn’t know what was going to come out of it. That’s the fun part, waiting to see what’s to come.

What did you want to show through “Reproduction?”

These are human clones that people created. They are the ones waiting to be “released” from a factory, awaiting their father and mother figures. I want to show a different “On the Origin of the Species,” but I think this may scare many visitors. But [I did it,] as artists are people who instigate a sort of awakening.

Why did you add big eyes in your six portraits?

I have added fake eyes that I took from Mona Lisa-like dolls. The fake eyes mean life. Adding life to inanimate objects is a type of doctrine of creation.