On a sweltering Sunday afternoon, 500 people from across Korea gathered at a hotel in southern Seoul, hoping to be certified as the country’s foremost experts on fried chicken.

It tested the appetites and noggins of eager candidates with a gauntlet of challenges on Korea’s many different varieties of fried chicken.

A test on fried chicken may sound ridiculous to some. But Baemin’s chimmelier test, held for the first time last year, posed a steep challenge that most hopefuls couldn’t overcome. This year’s test was no different.

The first session was a paper test composed of 30 multiple choice questions. Some asked simple history questions about the global origins of fried chicken and the oldest chicken brands in Korea, but many required up-to-date knowledge of the latest items from chicken franchises and their marketing campaigns, like celebrity spokespeople and jingle lyrics.

A company spokesman said that the test only required knowledge of the best-known 30 chicken franchises in Korea.

“This year’s test was made to show more distinction among candidates. We invited staff from chicken franchises and members of college chicken clubs to take part in developing the questionnaires,” said Baemin. 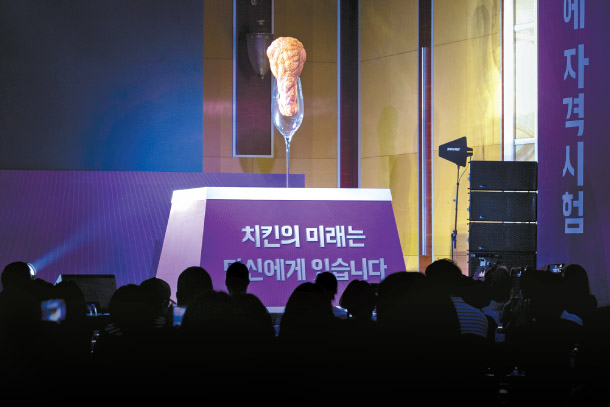 A statue of a chicken drumstick on the stage features an engraving that reads “The future of chicken depends on you.” [BAEDAL MINJOK, YONHAP]

The test’s highlight was the second session - a blind taste test that asked candidates to identify chicken by their brand. A box with one or two pieces of chicken in plain, spicy and soy sauce flavors from 10 different franchises was handed over to each candidate. A staff member walked in between the desks, refilling Coca-Cola in plastic cups that resembled wine glasses.

Baemin’s plan to heighten the chimmelier bar appeared to be a success. Those who took last year’s test agreed that the questions this year were trickier and covered a wider range of brands.

“I studied the Chichelin Guide [a chicken encyclopedia Baemin released last month] and websites of chicken brands to prepare,” said Yoon Yeo-hong, a 26-year-old graduate school student. “Unlike last year, people have seen the test before, so I think [the company] deliberately made the questions harder.”

To earn a chimmelier certification, candidates must earn 50 points out of a total 100. Last year, 119 out of 500 test-takers managed to pass it.

The quality of test-takers was of a whole new level this year. Last year, the company accepted the first 500 applicants who applied to take the test online. This year, only those who received a 10 out of 10 on Baemin’s preliminary online test could sit for the exam.

According to Baemin, the 500 at the event were selected from 27,000 who passed the first round. The number of people who took the online test was much larger, at around 578,000 people -around the same as the number of students that take the annual national college entrance exam. Baemin said it’s obvious why the company chose chicken for its certification program. 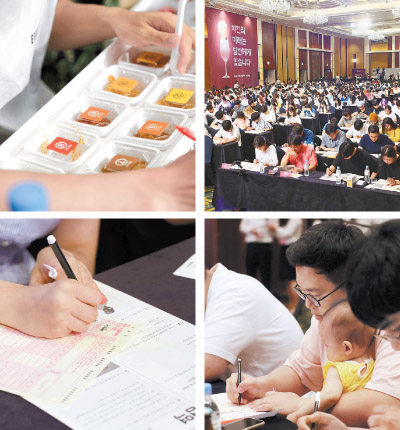 boxes of fried chicken for a taste test; a participant marks answers on a test; 500 test-takers compete at the Lotte Hotel in Jamsil, southern Seoul; a participant takes the test with a baby in his arms. [BAEDAL MINJOK, YONHAP]

“Around 30 percent of all orders made on the app are for chicken,” said a Baemin spokesman. “It’s an iconic food that has cultural significance. The basic idea behind the chimmelier certification is that there are baristas for coffee and sommeliers for wine. Chicken is enjoyed more widely, so why doesn’t it have certified experts?”

Many of last year’s chimmeliers said that their friends would seek advice from them on what chicken they should order - a small but impressive point of expertise in a country full of chicken fans. Over the past year, the chimmeliers also took part in developing the Chichelin Guide and the Chimmeli-ale with local brewer The Booth.

The Sunday test was a festival for chicken lovers, but at one point the event was ambushed by animal activists. Before the test started, a group of around 10 people rushed in the room with picket signs. They shouted “eating killed chicken is not funny,” and urged people to stop eating fried chicken. The chaos went on for about five minutes before the hotel staff removed them from the building.

Baemin released an official statement on Monday that said they were looking to hold the protesters legally accountable for interrupting the event and causing damages to test-takers and their families, including children, who were “abruptly exposed to aggressiveness.”

“We respect the opinions and thoughts of others, but we do not believe they should be expressed in illegal and rabid ways,” said the company.