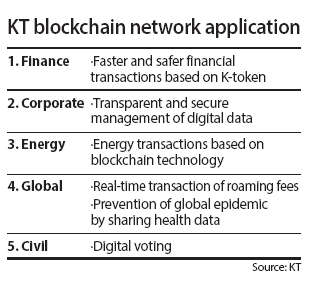 KT unveiled a blockchain-based communications network on Tuesday, which it said it will use to help improve security in the finance, energy and entertainment sectors.

The new network can process 2,500 transactions per second (TPS) and will be able to process 100,000 TPS by next year.

Blockchain is a system of storing data in distributed ledgers, which makes it nearly impregnable against hacking. While advocates tout blockchain’s many possible applications,

Korean consumers haven’t yet experienced the advantages of the technology on an everyday basis aside from trading cryptocurrencies mainly due to the slow transaction processing speeds of most blockchain platforms.

These slow speeds were considered inevitable when using the technology, considering the numerous distributed ledgers that need to be updated for each new transaction.

“We’ve been working on establishing the blockchain network for the past four years,” said Moon Jung-yong, head of a KT blockchain task force. “Now, we would like to use our platform for a range of industries, including finance, energy, roaming services and health care.”

KT said applying its distributed ledger technology to the internet would take away the need for consumers to type in their IDs and passwords to log in to their emails or online banking accounts. Users could be given a special identification code that will enable them to access all their online services without further verification.

KT also plans to use the technology to calculate roaming fees between global telecommunications companies. Real-time tracking of fees will enable consumers to more effectively manage their roaming budget.

KT also opened a web novel retail platform called Blice. Blockchain is used as part of its transparent payout system to content creators and to prevent plagiarism and illegal sales.