London aims to be fintech hub

London aims to be fintech hub 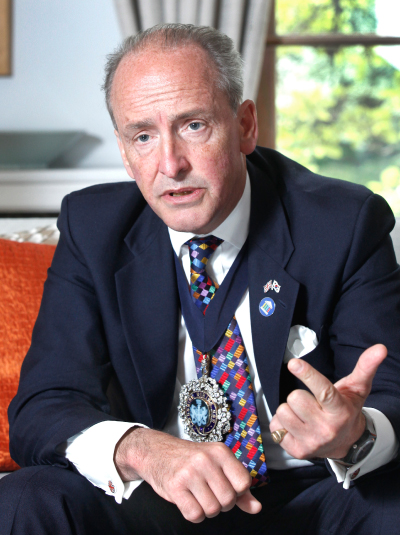 Charles Bowman, Lord Mayor of the City of London, speaks at the British Embassy in Korea, central Seoul on July 13. [PARK SANG-MOON]

When 51.9 percent of the United Kingdom voted to leave the European Union, the largest international single market in the world, doubts were raised over whether London could maintain its status as a global financial hub in an increasingly hostile economic environment.

Charles Bowman, Lord Mayor of the City of London - the City of London is a historical financial district that is home to both the Bank of England and the Stock Exchange with its own administrative authority - said that the city will likely remain an international center for commerce and finance due to the many “fundamentals” that other countries would find it hard to emulate.

“We are a truly international hub for financial services. We are confident that London will remain a preeminent hub, long after the Brexit,” Bowman said in an interview with the Korea JoongAng Daily.

“London has fundamentals of rule of law, culture, history, diversity, education, taxation and infrastructure innovation. These fundamentals are difficult to replicate,” he said, adding that the City of London is not seeing a significant exodus.

The Lord Mayor visited Korea on July 13 to discuss ways to expand cooperation on financial service areas including fintech, meeting the head of the Financial Services Commission (FSC) and Finance Minister Kim Dong-yeon.

Bowman has regularly held dialogue with the heads of Korea’s financial regulators. One of the most notable achievements is an agreement called the referral mechanism, signed in June with the FSC.

He explained that the mechanism is a powerful system that helps fintech companies from both countries readily enter the respective market.

Bowman said that he is confident London will become a central fintech hub because of its favorable regulatory environment.

“London is a one-stop shop. Center of technology is 500 meters from our center of finance. It is a two-minute walk to the regulator and five-minute to the government. With respect to the U.S., it is 5,000 kilometers,” he said.

The mayor cited the UK’s regulatory framework, called sandbox, as a major factor that makes London an attractive destination for fintech firms across the world.

He said that it allows firms to “work with the regulator and test their business in a safe environment.”

The visit was also intended to promote the Lord Mayor’s initiative to enhance trust between business and society.

“In 2008, in the time of financial crisis, it was a catalytic moment for the seismic shift in the relationship between society and business,” he said. “The Edelman Trust Barometer showed a continued reduction in trust between businesses and society [since then].”

To advocate trust in the business sector he launched a survey to ask people at different levels of society about trust.

Bowman also expressed a positive outlook on London’s role in potential inter-Korean economic projects that could include large-scale infrastructure investment.

“We tend to have capital, but we don’t have enough projects to invest,” he said. “We could draw on our expertise in soft skills, experience and capital into infrastructure projects.”