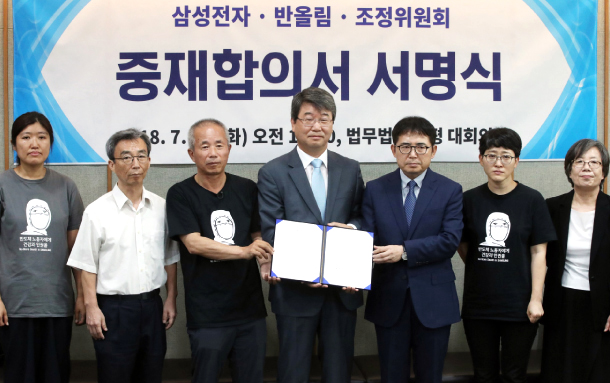 Samsung Electronics and relatives of former Samsung factory workers who died of or suffer diseases allegedly caused by the chemicals at the manufacturing facilities signed an agreement on Tuesday to “unconditionally” accept any measures of arbitration.

By signing the agreement the two sides have consented to pass on the right to arbitrate the case to an independent party. As a result the 11-year-old high-profile dispute will officially end sometime in September when detailed measures will be finalized.

Signing the documents means that the families and Samsung have committed to accept a decision on the regulations and procedures on providing compensation for diseases, measures to compensate the victims, advice on how Samsung will make an apology and Samsung’s promise to prevent a recurrence of workplace calamities and to hold charitable activities.

From Samsung, Kim Sun-shik, an executive director, attended the signing ceremony on behalf of Chief Executive Officer Kim Ki-nam, while Hwang Sang-ki represented a group of families of victims including her daughter, Hwang Yu-mi. The procedure took place at Jipyong, a law firm in central Seoul.

Kim Ji-hyung, head of the four-year-old arbitration committee and also managing partner of Jipyong, thanked both parties for accepting the method of arbitration based on “blind trust.”

“It’s been over 13 years since my daughter developed leukemia. It’s a shame that resolving the issue surrounding laborers who contracted diseases from chemicals at work and died took so long,” said Hwang at the ceremony. “Such an event should never be repeated.”

“It was hard to accept the method of arbitration,” said Kim Sun-shik, the Samsung executive, “but we concluded that entirely resolving the problem was the only way to console the pain of those who suffer disease and their families as well as a socially valuable act.”

He added that Samsung will “proactively” comply with the upcoming schedule set by the arbitration committee.

It was Hwang Yu-mi’s death in March 2007 that triggered the lengthy feud. After working at Samsung’s Giheung chip factory in Gyeonggi from January 2004 through July 2005 she was diagnosed with acute leukemia in 2005. She was allegedly exposed to benzene and radiation.

Her father began filing claims for victims of industrial disasters with the Korea Workers’ Compensation and Welfare Service and went on to become a founding member of Banolim, which consists of the relatives of former Samsung factory workers as well as other civic activists, launched in March 2008.

Banolim claims there were 320 former Samsung employees who worked at either semiconductor or LCD plants that developed workplace environment-related illnesses, and 118 of them have died.

Today the group will terminate the sit-in protest in front of Samsung Electronics’ Seocho office in southern Seoul with loudspeakers and leaflets that began on Oct. 7, 2015.