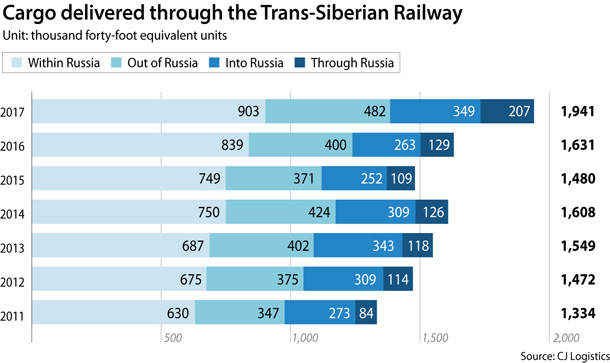 A team of South Korean government officials visited the North on Tuesday to inspect railroads along the west coast, the South’s second on-site inspection of the North Korean railway network.

With inter-Korean efforts to link the peninsula’s railways underway, the prospect of an overland route to Europe is raising the hopes of local logistics companies.

The South Korean delegation, headed by Hwang Sung-gyu, a senior official at the railway bureau of the Korean Ministry of Land, Infrastructure and Transport, traveled North on Tuesday to inspect the 15.3-kilometer (9.5-mile) railroad along the Gyeongui Line, which connects Munsan in the border city of Paju, Gyeonggi, to Kaesong in the North. North Korea reportedly sent a team headed by Kim Chang-sik, the vice director of overseas operations in the Ministry of Railways.

“The inspections are preliminary checkups before the South sends another team on a train to conduct more detailed inspections,” said Ahn Byung-min, head of the northern economic research group at the Korea Transport Institute and a member of the Presidential Committee on Northern Economic Cooperation. “There hasn’t been any maintenance work done since the North closed its rail connections with the South about nine years ago, so we need to know if our trains could travel up North once the railways are reconnected.”

On July 19, the delegation inspected the Donghae Line, which goes from Mount Kumgang to the border with the South along the east coast.

The two inspections were conducted in the span of a week as part of the agreement to “modernize” the railroads in the North and connect them with the railways of the South made by South Korean President Moon Jae-in and North Korean leader Kim Jong-un during their summit in April. Working-level talks started last month when South Korea’s Vice Transport Minister Kim Jeong-ryeol met with Kim Yun-hyok, the North’s vice minister of railways.

Once the connection is completed, the route from Europe to the Trans-Siberian Railway to the Trans-Korean Railway would become the longest train network in the world at nearly 10,000 kilometers.

While inspections are underway to figure out how to make that happen, experts say it would take a substantial amount of money and effort, as well as time, before trains can travel up and down the Korean Peninsula.

Kim Hyun-mi, the South Korean transport minister, said during a briefing at the National Assembly on Monday that it would cost about 2.4 trillion won ($2.1 billion) to just link the disconnected railroad along the east coast from Gangneung in South Korea to Kosong County in the North, vital for the Donghae Line to connect to the Trans-Siberian network.

“It’s difficult to predict just how long it will take to connect the railroads,” said Ahn of the Korea Transport Institute. “Right now, South Korea has a limited amount of data about the railway network of the North, and most of the data is from the [Japanese] colonial era.”

“We need to check things like electricity circuits and the conditions of the tracks,” he added. “This isn’t just about repairing the dilapidated railways. It is a modernization process, and North Korea would want its rails to be developed to meet international standards.”

Ahn Young-hoon, a technical support engineer for infrastructure development at GS Engineering & Construction and former official at the Korean National Railroad, the predecessor of Korail, explained that North Korea has about 1.5 times more track than the South, but most of the lines have not had any work done for the past 20 years or so.

Economic sanctions on the North are another barrier, although Ahn from the transport institute said that this shouldn’t be a too big of a problem given the extensive period of construction required to develop the North Korean railroads.

Although hurdles remain, local logistics companies are preparing for the potential of rail transport connecting the Korean Peninsula with China, Russia as well as other parts of Europe.

In May, CJ Logistics launched a door-to-door delivery route connecting Asia and Europe via the Trans-China Railway and truck delivery dubbed the Eurasia Bridge Service. While the Korean company has been using the Chinese railway system after setting up CJ Speedex, a joint venture with China’s TCL Group, in 2016, this was the first time it linked it with a truck network to deliver goods door-to-door between Asia and Europe.

The service started in May and connected Chengdu station in China, Lodz station in Poland, Nuremberg station in Germany and Tilburg station in Netherlands. The network expanded by June and now connects 22 stations from China and 30 stations in Europe and Central Asia.

According to CJ Logistics, cargo delivery from China to Europe via sea routes usually takes roughly 35 to 40 days. Using the Trans-China Railway, however, cuts that time span to around 17 days. Rail delivery is also cost effective compared to air delivery, which is about five times as expensive.

If the Trans-Korean Railway is realized, the company plans to link the Korean rail network with the Trans-China Railway, Trans-Mongolian Railway and Trans-Siberian Railway to establish an integrated rail network across the Eurasia region.

In March, it inked a memorandum of understanding with Russian logistics company Fesco to launch joint services on the Trans-Siberian Railway. The two companies are still discussing ways to cooperate on the so-called northern logistics network, one of most important parts of the government’s plan to boost economic cooperation with countries north of South Korea.

“If Trans-Korean Railway is linked it will make Korea, especially cities like Busan, a global logistics hub,” a spokesperson from CJ Logistics said.

Hyundai Glovis, the logistics arm of Hyundai Motor Group, is also preparing for an integrated railway network that would connect Seoul with Europe by adding businesses on Trans-Siberian Railway.

The company is planning on delivering knockdown parts from Busan in Korea to Hyundai Motor facilities in Russia using rail from next month via the Russian port of Vostochny. While it would take about 43 days to deliver the parts only using sea routes, using rail will reduce the time to 22 days, according to Koo Hyung-joon, an executive vice president at Hyundai Glovis.

The company has been delivering cold-rolled steel coil and some maintenance parts for Hyundai Mobis and Hyundai Steel using the Trans-Siberian Railway.

Koo said the Korean government should cooperate with China and Russia to establish an integrated rail network and also review investing in major logistics hubs in those countries to set up logistics centers or ports.