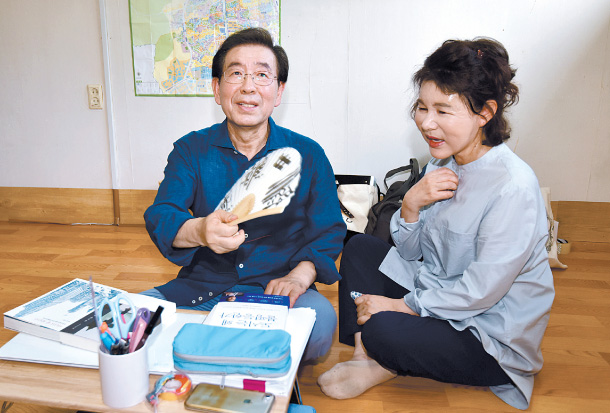 Seoul Mayor Park Won-soon, left, and his wife Kang Nan-hee on Sunday at a rooftop house in Samyang-dong, northern Seoul, where Park is living for a month to understand the needs of residents in the area. [JOINT PRESS CORPS]

Seoul Mayor Park Won-soon isn’t getting much sleep these days.

Ever since he moved into a small rooftop house in the neglected neighborhood of Samyang-dong as part of a month-long experiment, the mayor has been battling summer heat like no other.

His 322-square-foot two-room has no air-conditioner and just two fans. With evening temperatures reaching 30 degrees Celsius (86 degrees Fahrenheit), Park and his aides have sometimes resorted to sleeping on a table outside the house. On Monday night, the mayor went to bed at midnight, only to wake up at 5 a.m. to sweltering heat and moved outside, according to his aides.

But for Park, who staked his re-election campaign last month on the redevelopment of this neighborhood and others like it in Gangbuk District, northern Seoul, getting to know the locals has made up for the discomforts. He’s been living in the house since Sunday and pledged to stay there until Aug. 18.

The mayor has been commuting to and from the hilltop neighborhood. On Tuesday, he began his day with a meeting at the Blue House and returned to Samyang-dong in the afternoon to meet with residents.

“I appreciate the fact that Park is not trying to hype up his stay here,” Kim Jung-soon, 76, said. “I like that he is quietly exploring the area and meeting the locals.”

Case in point: On Monday, Park’s visit to a day care center was initially open to the media, but the Seoul Metropolitan Government changed it to a closed-door event last minute. “We ask for media’s understanding,” a press officer said in a text message to reporters. “We want to minimize possible inconvenience to the locals.”

On the first night of his stay at the house on Sunday, Park told reporters that the goal of his month-long residency was to correct the development imbalance between Gangbuk District, long overlooked by the city government, and Gangnam District, the glitzy, skyscraper-lined neighborhood south of the Han River. “I will announce my findings at the end of the month,” Park said.

One point of contention is two apartment complexes in Samyang-dong. The neighborhood sits at the base of Mount Bukhan, and against a backdrop of low-rise buildings and homes, the two complexes stand out like fortresses.

“Look at that apartment over there,” Park told Park Yong-jin, who represents the district in the National Assembly, when the lawmaker visited the mayor on Sunday. “I think it stands in the way of the wind. I will never let them build like that anymore. The scenic value of a landscape is too important, so how could they simply build a high-rise building there?”

Indeed, when a reporter visited the apartment complexes at the foot of the mountain on Sunday, the temperature markedly dropped by 2 to 3 degrees Celsius (3.6 to 5.4 degrees Fahrenheit).

“The wind that blows from the mountains in the area is so great,” one resident said. “It sometimes feels cooler than indoor air-conditioning.”

“The residents of the apartment complex usually start using air-conditioners later than residents of other areas,” another resident said. “Sometimes, just keeping the windows open is good enough.”

By comparison, the monthly rent for homes similar to Park’s rooftop house in Samyang-dong is 300,000 to 500,000 won. The deposit is usually 5 million to 10 million won.

“I’ve been living in this neighborhood for 48 years,” said one woman who lives near Park. “After those apartments were built, they blocked the cool breeze from the mountains.”

“I don’t know if you can blame everything on the apartments though,” another resident said. “I guess they could be blocking the wind from the mountains, but heat waves have various other causes.”

The temperature near Park’s house at 5 p.m. on Sunday was 36.3 degrees Celsius. “I don’t know how the mayor is going to make it through in there,” a resident said. “It will be like living in a sauna.”

The nighttime temperature has not dropped below 25 degrees Celsius for most nights since July 11, according to the Korea Meteorological Administration.